A Tribute To Jaromir Jagr 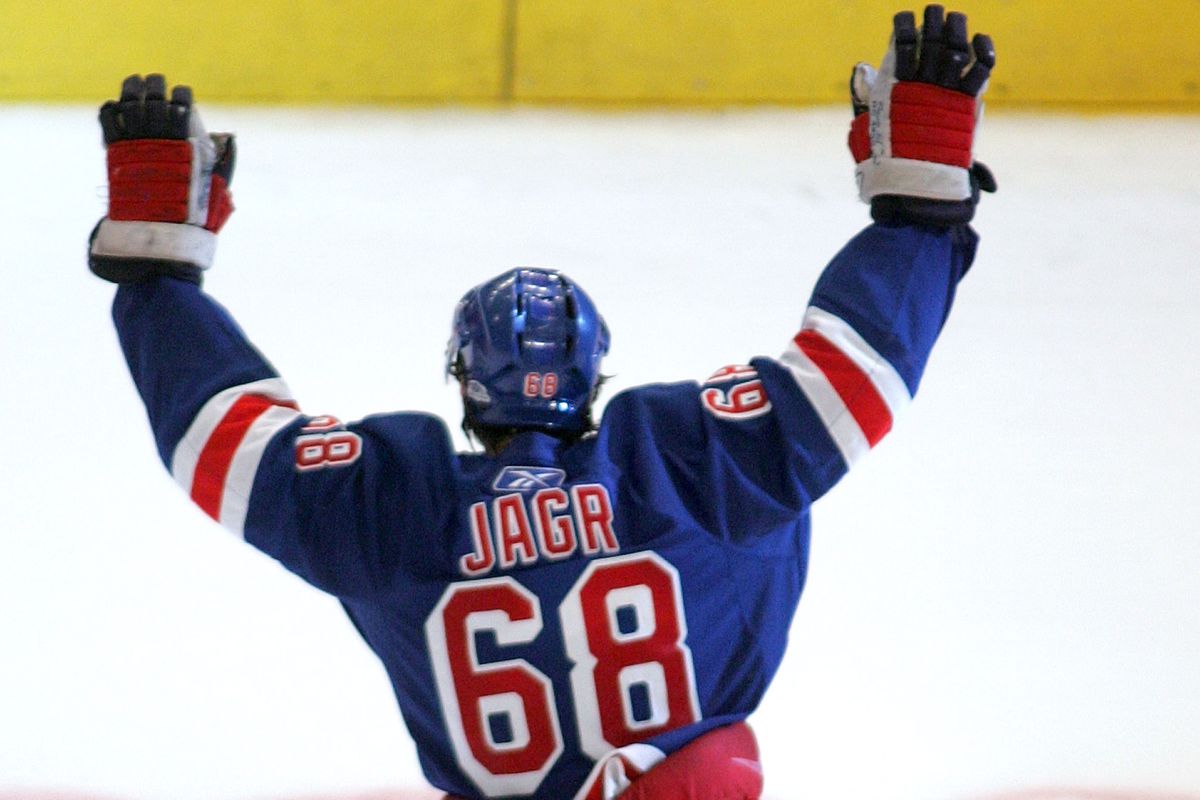 There’s no mistaking it, whenever you hear or see the name Jaromir Jagr, the first thing that comes into your mind is legend.
Wherever he went, Jagr stood out. Whether it was as a young, long-haired rookie paired alongside Mario Lemieux or the grizzled veteran leader for the Rangers, you knew who Jaromir Jagr was.

Earlier this season Jagr was placed on waivers by the Calgary Flames with the intent of terminating his contract with purposes of him going back overseas. For many hockey fans, this was a sad day as everyone knew that this could be the end of his time in the NHL. Jagr, now at 45 years of age, displayed excellent prowess and skill over the last few years since coming back from a three-year stint in Russia. For an extended period of time, he delayed father time and kept up with the speedy pace the new NHL provided.

“I want to thank Brad Treliving and the Calgary Flames for giving me the immense opportunity to be a part of their team and continue my NHL career this season,” said Jagr in a statement. “Although I am very disappointed that things did not turn out as we had hoped due to a number of circumstances, I am deeply grateful to the Flames, the fans and the City of Calgary for having welcomed me so generously. I now look forward to continuing the season in Kladno.” – Calgary Flames Website

Jaromir Jagr clears waivers. End of an era. That's very likely it for his NHL career.

Jonathan Huberdeau and Aleksandr Barkov are just two examples of young, talented players Jagr was able to keep up with. Time and time again over the last few years, Jagr has been able to make an impact. Jagr has played in 24 NHL seasons with the Pittsburgh Penguins, Washington Capitals, New York Rangers, Philadelphia Flyers, Dallas Stars, Boston Bruins, New Jersey Devils, Florida Panthers, and Calgary Flames. He is the last active player to step on an NHL rink that was drafted in the 1990 NHL Entry Draft.

The Czech Republic native is the NHL’s active leader in goals (766) and assists (1155) and his 1921 points are second all-time behind only the great Wayne Gretzky. A 13-time NHL All-Star, he’s won the Hart Trophy as the league’s most valuable player in 1999 and claimed the Art Ross Trophy on five different occasions as the league’s top scorer.

Jagr has played in 1,733 games and only needs to suit up in just 38 more to pass legend Gordie Howe for most games played in NHL history. Unfortunately, with the current climate in hockey, it seems highly unlikely that he will reach this milestone, which makes this news all the more lachrymose. It seems that this is an end of an era. 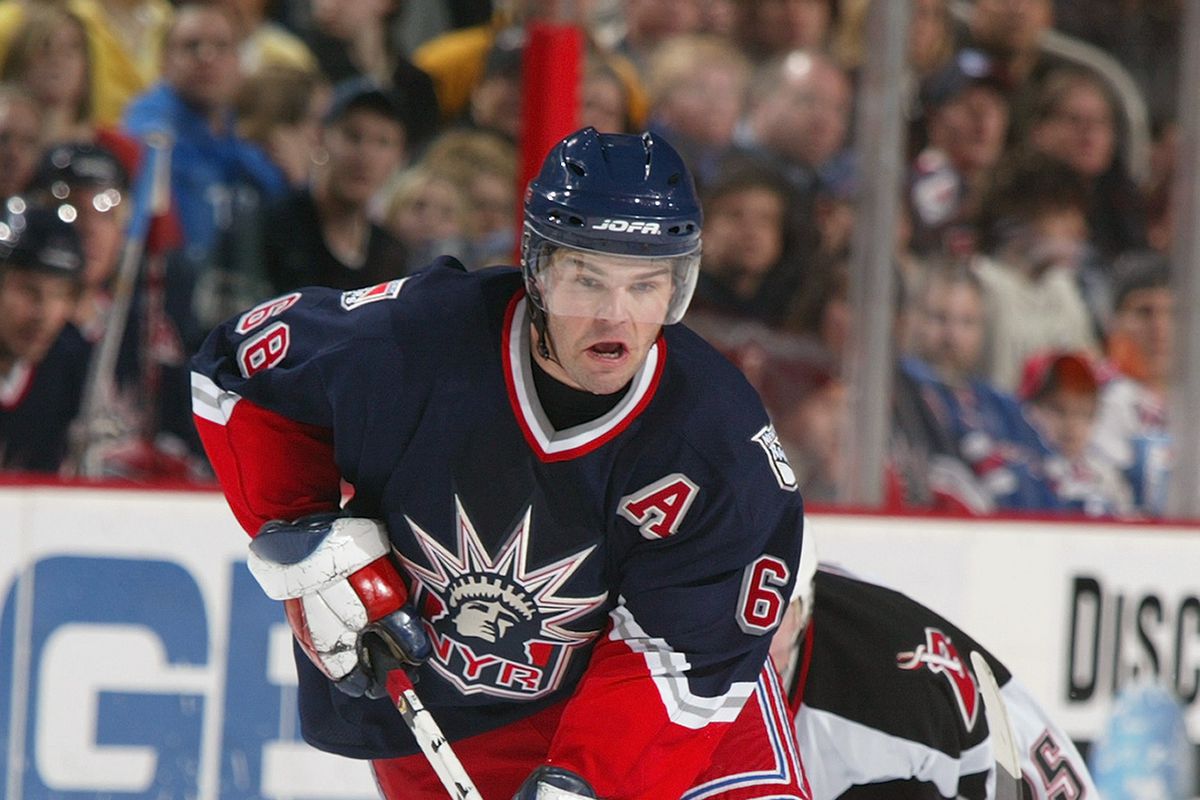 What makes Jagr so special? First and foremost is his skill and work ethic. Arguably one of the more skilled forwards the NHL has ever seen, Jagr possessed a skill-set that is rare to come by, being an incredibly strong skater with super hands and vision of the ice that is unparalleled in today’s game. When Jagr would possess the puck in the offensive zone, he meant business as he was almost impossible to knock off the puck. He also displayed a lethal wrist shot, making Jagr was one of the best at tickling the twine with precision and incredible accuracy. An incredible talent with a hockey mind that rivals other greats in the game, Jagr truly stood out among the rest as one of the greatest that’s ever stepped on the ice. As The Hockey News describes him…

Possesses two of the strongest legs ever seen on a hockey player. Has incredible instincts. Is equally strong setting up linemates or finishing. Is amazing along the wall when in control of the puck. Is still scoring after all these years. The Hockey News/ Jaromir Jagr

Jagr’s talent can’t just be described in words, it must be seen…

Another thing about Jagr that makes him great is his work ethic. Not only does he show prowess on the ice but off the ice, Jagr does wonders to keep himself in tip-top shape. In order to play the way he’s played over the years, he’s kept himself active by workout out late nights and improving his skill by practicing with a weighted vest along with weights on his skates, as well as shooting a weight into a net to increase strength on his shot. Below is a video that begins just after the eight-minute mark that shows him with the weighted vest on doing a drill. The rest of the video (in Czech but has subtitles) profiles what kind of workouts Jagr does to keep himself the best at what he does.

Even at his age, he’s doing things that not many people his age can do, and for a long time, after his prime years ended, these workouts contribute to the skill he already has and has kept him going in the NHL for many seasons.

He shoots a six-pound med ball against a wall. He wears a 45-pound vest and ankle weights, and he’ll just wear them
all day until he gets on the ice. Then sometimes when he’s on the ice he’ll skate with the weights on. There was one practice where one of our star defensemen lifted up Jagr’s stick and took his puck away, and after that Jagr came in and said, “I’ll never get a puck taken away from me again!” Mens Fitness/ Jagr’s Workout Secrets

Additionally, what endears Jagr to hockey fans is his personality. He’s a funny guy. Whether it’s messing with Ilya Bryzgalov or making jokes during his postgame pressers, Jagr is an interesting guy with a lot on his mind. This regular, funny guy personality connects with fans because it shows that he’s just a regular human like you or me. Jagr always has something interesting to say, and when he does, it more than likely puts a smile on all of our faces.

The guy is a riot, there is no denying that. The NHL will miss someone like him.

For many teams, Jagr represented bringing in a top-tier player; and for the Rangers and their fans, this was more than just bringing in a superstar, this was a signal that things were changing in New York. From 1997 to 2004, the Rangers were nothing to write home about.

The Rangers had missed the postseason for seven consecutive seasons. Following the fire sale of the expensive and underwhelming vets that made up the team’s roster, as well as the retirement of long-time captain Mark Messier, many picked the Rangers to be the worst team in the NHL. Jagr was not fond of this notion and promised the team would surprise a lot of people and make the playoffs. Typical Jagr, he began to back up those claims and started strong during the beginning of the 2005 season and the return from the lockout.

Jagr became only the fourth player in NHL history to score ten or more goals in less than ten games at the start of a season. His return to his old form helped the Rangers return to the playoffs, but injuries crippled New York and led to a four-game sweep in the first round by the New Jersey Devils.

On March 27th, 2006, against the Sabres, Jagr scored a goal and an assist, which tied both the Rangers’ single-season goal record of 52, previously set by Adam Graves in 1993–94, and the Rangers’ single-season points record of 109, which was set by Jean Ratelle in 1971–72. On March 29th, Jagr passed Ratelle when he assisted on Petr Prucha’s goal against the New York Islanders. On April 8th of that season, against the Boston Bruins, Jagr scored his NHL-leading 53rd goal of the season, breaking the Rangers’ single-season goals record.Despite not winning league MVP, Jagr won his third Lester B. Pearson Award as the NHL’s most outstanding player. On October 5th, 2006, before the first game of the 2006–07 NHL season against his former team, the Washington Capitals, Jaromir Jagr was named as the 24th captain in the history of the New York Rangers. Jagr then proceeded to score a goal on his very first shift in the game, just under 30 seconds into the new season.

This was the beginning of the Rangers rise from the pit of despair. The team was beginning to take shape and Jagr was the head of this turnaround. Let’s not forget how the line of Jaromir Jagr, Michael Nylander and Martin Straka anchored the team and provided one of the greatest forward lines this franchise has boasted.

November 19th, 2006 was an important day for Jagr as he scored his 600th career NHL goal on Tampa Bay goaltender Johan Holmqvist, making him the 16th player in NHL history to do so. Teammate Brendan Shanahan had scored his 600th goal almost three weeks earlier, making them the first teammates in NHL history to score their 600th goal in the same season.

Another thing Jagr helped out with was the power play. The chemistry with Straka and Nylander along with Shanahan, Jagr proved to be a lethal weapon on the man advantage for the Rangers. Jagr was always a threat on the ice for the Rangers.

After leading the Rangers to the playoffs in 2007 and in 2008, Jagr left the Rangers to play in Russia. There is no doubt that Jagr was partly responsible for the Rangers resurgence to relevancy. Playing through injuries and becoming a leader for this team, Jagr and company began what would be a decade of incredible memories for many years to Ranger fans. The trade for Jagr was a statement to crawl back to relevancy and that they did.

Jagr bounced around to a few more teams after returning to Russia, delighting us with his charm, and ageless skill. Now being that his future is unknown, whether he plays in the NHL or continues overseas, Jaromir Jagr not only was a bright spot for the NHL but was incredibly important for the revival of a downtrodden New York Rangers franchise. Whether he continues to play or finally hangs em up, Rangers fans have a lot to be thankful for, and having Jaromir Jagr was one of those things.