Alexandar Georgiev was the first goalie off the ice today for the Colorado Avalanche indicating he will get the start against his former team, the New York Rangers.

Signed as an undrafted free agent by the Rangers on July 17, 2017, he spent 5 seasons with the club.

Breaking into the league as Henrik Lundqvist’s understudy that season, Georgiev learned from one of the league’s best. In his mind, Georgiev was preparing himself to eventually take over as the team’s staring goaltender, but it didn’t work out that way.

During the 2019-20 season, another goaltender took the organization by storm and became Lundqvist’s heir apparent.

Igor Shesterkin quickly cemented himself as the team’s number one goalie, while Georgiev struggled in a backup role.

“They went ahead with (Shesterkin) pretty much from the start and that was really frustrating. I want to play a lot,” he said. “Last couple seasons, I really didn’t get too many of those opportunities to get going. I definitely feel more in the flow when I get to play games without too many breaks.”

Shesterkin would go on to win the Vezina Trophy this summer and the Rangers would trade Georgiev’s rights on Draft Day to the Avs. In exchange, the team received a third and fifth-round pick in 2022, plus another third in 2023.

Colorado quickly signed the pending RFA goalie to a three-year deal on Sunday for an AAV of $3.4 million.

Of course, Georgiev expressed his gratitude to the Rangers and the fans before leaving.

“I just wanted to take the moment to thank the NY Rangers organization for giving me a chance 5 years ago! That’s all I ever needed,” Georgiev said in a farewell note on IG. “From getting the first nhl call up and reading the Letter to seeing this team become a contender and make a run at the cup. From playing in covid bubbles to having full stadiums with celebrities behind the bench, it’s really been a journey full of memories.

“And even if that journey wasn’t always smooth, it’s been an honor putting on that Jersey. Thank you to all the staff at the arenas who made you feel like part of a family. And big THANK YOU to all the Rangers fans who are so passionate, it was incredible playing in front of you all.”

Tuesday marks goalie Alexandar Georgiev’s return to New York and the first start of his career against the Rangers.

“I feel like I always put big expectations on myself,” Georgiev said coming into the contest. “This will be a challenge. But it’s no different than every year.”

The Rangers are likely to give Georgiev a quick tribute video, similar to what they did for Ryan Strome and Frank Vatrano when they came into town last week. Former coach David Quinn also received a thank you and an unnecessary chorus of boos the following game.

Another former Rangers is coming back tonight as well. Dryden Hunt, who played three games for the team this season was claimed by the Avs off waivers last week. He has no points in two games with Colorado since the pick up. 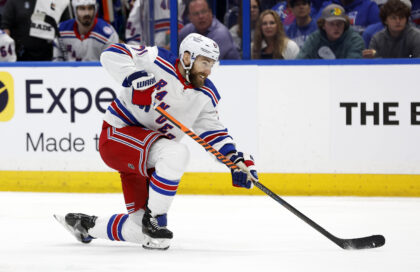