The New York Rangers will give Igor Shesterkin a rest as they call on Alexandar Georgiev in Ottawa today. Otherwise, Gerard Gallant announced the lineup will be the same as it was against the Predators.

Rangers get set to take on Senators

The Blueshirts have rattled off three straight road wins to improve to 3-1-1. They have picked up points in 7 points straight after a disappointing season opening loss to the Washington Capitals.

Alexis Lafrenière scored his second game-winner of the year with 9:07 remaining in the third period to give the Blueshirts a spirited 3-1 victory over the Nashville Predators on Thursday night.

Filip Chytil scored, Barclay Goodrow tallied into an empty net in the final seconds and Sammy Blais set up both goals for the Rangers, who survived going 0-for-4 on the power play and hitting three posts in the opening 40 minutes. The Rangers also had a goal by defenseman Ryan Lindgren negated when Nashville challenged an offsides call.

Igor Shesterkin turned in another strong performance by stopping 28 shots in a game that featured plenty of hard hits and scoring chances.

“Gritty, gritty effort tonight,” coach Gerard Gallant said. “Tonight, for me, was the toughest game we’ve played so far this season. Everybody battled for ice, both teams. I thought Nashville was real good. I thought we competed hard. I thought it was a gritty, gritty game and we came out on top.” 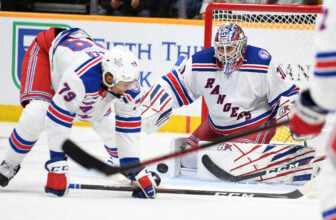 Also Read:
Rangers versus Senators by the numbers: Gerard Gallant off to a good start as coach

Eichel seems destined to land in Anaheim, and Seattle Kraken in talks to get an outdoor game? Read more here.