Alexis Lafreniere returning to Rangers lineup on the fourth line?

As the New York Rangers get set to take on the Detroit Red Wings in a Saturday matinee affair, it appears Alexis Lafrenière will be back as promised.

“We’re going to rest players when the opportunity is there,” head coach Gerard Gallant reiterated. “I made a decision the other night to rest Laffy. Not because he’s played bad hockey… he’s young kid but we look at that stats and we’ve got medical people testing him every day. You take advice from people and that’s what happened.”

Alexis Lafrenière will be back against the Red Wings

Per multiple reports, Lafrenière practiced on the fourth line that featured a rotation with three other players. Dryden Hunt, Kevin Rooney, and Ryan Reaves all took turns.

“Laffy will be back in tomorrow,” Gallant said. “Let’s see where he goes.”

It’s really not surprising that Lafrenière would return to the lineup on the fourth line after the last game. Filip Chytil, Kaapo Kakko, and Barclay Goodrow were buzzing and drove the offense in the win over the Flyers.

“That line was excellent the other night,” Gallant explained. “They were real consistent.”

Kakko recorded two goals in the game, one off a great feed by Chytil for his only point. Goodrow picked up two assists himself with one on Kakko’s first goal.

What to make of Lafrenière on the fourth line?

The most hockey he’s played in a single hockey season was 2017-18 where he suited up in 61 regular season games and added 14 more in the playoffs in the QMJHL for the Rimouski Oceanic. He then added another 5 international games for a grand total of 79.

I’m sure him playing on the fourth line is not going to go over well with the fanbase. However, if it turns out that he’s just starting there and is bumped up during the game as Gallant looks to reduce minutes for players like Chris Kreider and Artemi Panarin, then it’s no big deal.

Ultimately, it would make sense to slide Goodrow down to the fourth line and bump Lafrenière back up.

However, if Lafrenière becomes a fourth line fixture in the playoffs or a healthy scratch the uproar in Rangerstown will be loud. There would be very little justification for that kind of move, unless he’s injured, which is not the case.

Other practice news and notes

Patrik Nemeth was on the ice today skating with the team and appears to be nearing a return.

The third pairing of Justin Braun and Braden Schneider is not expected to change for the game tomorrow.

Nemeth, 30, has five points in 57 games this season. He has two years remaining on a deal that pays $2.5M per season.

Tyler Motte, who was injured in the win against Pittsburgh on April 7. At the 12:37 mark of the third period, Anthony Angello hit a prone Motte reaching for the puck in a bent over position. The Penguins forward could’ve let up knowing that Motte didn’t see him, but instead came in hard with his hip to Motte’s shoulder.

“We’re not looking for him for the next 7 games that’s for sure,” the coach said. “I haven’t heard a thing, just that he’s going to be out for quite awhile.” 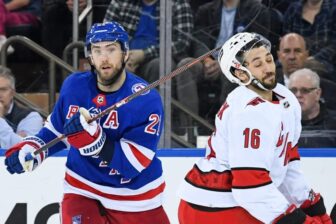 Mike Bossy passes away at 65

The NHL is mourning the loss of NY Islanders and Hall of Fame Great Mike Bossy. Read more.