Are the New York Rangers really interested in Evan Rodrigues?

The latest rumors surrounding the New York Rangers appears to have Evan Rodrigues of the Pittsburgh Penguins in them. Let’s face it, at this point the list of who GM Chris Drury isn’t interested in is probably shorter.

So how did this one come about? Well, the reason Rodrigues has any traction is because Sportsnet’s Elliotte Friedman brought it up on a recent podcast.

“Someone suggested to me if the Rangers would go for Evan Rodrigues as a number two center,” Friedman noted. “I said, ‘Do you think he can play 2C?’ and he said, ‘Yeah, I think he could,’– this was suggested by a player.”

There’s just so much to unpack here, so let’s get to it.

Rodrigues, 28, registered 43 points in 82 games for the Penguins last season. His previous career high was 29 points in 74 games back in 2018-19 with the Buffalo Sabres.

I’m not sure about you, but this doesn’t indicate second line center production.

Aside from that being one of the main issues with the suggestion, the soon to be 29 year-old (July 28) is a pending UFA. He’s likely to command at least a three-year deal on the open market with an AAV of $3M plus.

Why would the Rangers go for a bottom six player in free agency hoping he could be a second line center with one of the best forwards in the world in Artemi Panarin? Not when there are answers on the roster and better options via trade.

Even if the thought process was to promote Filip Chytil to the second line and have Rodrigues take over as the third, I’d raise questions if that was the wisest way to spend limited cap space. Especially since the Rangers have Barclay Goodrow and he can slot in as the 3C.

I think the biggest thing everyone needs to understand about this latest rumor is that it’s really not a bonafide one. This is a player’s speculation in a conversation with Elliotte Friedman that he relayed out of nowhere during his 32 Thoughts Podcast.

The real focus from what I’ve been able to gather is very much J.T. Miller at the right price. I also believe the Rangers will continue to ask about Mark Scheifele and stay in touch with both Ryan Strome and Andrew Copp before making any trade. 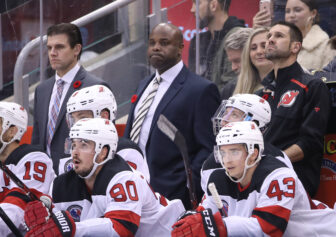