It’s time for a rematch as the New York Rangers play the New Jersey Devils on the road in the second half of the home and home series. The Blueshirts will look for some revenge after being beaten easily at the Garden 5-2.

Artemi Panarin will suit up for the first time this preseason along with Barclay Goodrow, who was nursing a foot injury from last year’s playoffs. Vincent Trocheck was “under the weather” per the Rangers and Filip Chytil will play in his stead.

Artemi Panarin will play his first game of the preseason on Friday night with Jonny Brodzinski as his center and Vitali Kravtsov on the opposite wing.

The Rangers leading scorer from last season with 96 points in 75 games has taken a special interest in the young fellow Russian.

“Honestly, it’s more for selfish reasons,” Panarin said jokingly. “I’m just trying to get him to hold the puck more, and to be a better linemate. He’s getting better every day.”

So far, Kravtsov has played in two games and has failed to register a point. This will be his first time on a line with his mentor and the Rangers are hoping to see more from him in this contest.

In 31:32 of total ice time over two games, the 22 year-old Kravtsov has registered 5 shots and come away with a -2 rating.

According to Newsday’s Colin Stephenson, who is in Jersey for the morning skate, the lineup will look something like this:

Also of note is that both Jimmy Vesey and Dryden Hunt are in the lineup with the two likely locked in a battle for the 13th forward spot.

Vesey has been a standout in camp and is making a strong case to turn his Professional Tryout (PTO) into a standard NHL contract. In two preseason games, the 29 year-old forward has 1 goal and 2 assists.

Filip Chytil, Julien Gauthier and Matt Bartkowski were in Thursday night’s loss to the Devils at Madison Square Garden. They’re all back for this one. 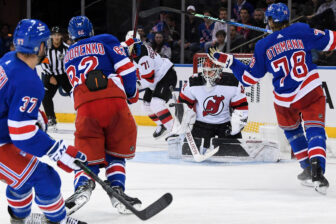