The New York Rangers received an emotional boost in their elimination game against the Carolina Hurricanes on Saturday night. Barclay Goodrow, who last played in the team’s triple OT loss to the Pittsburgh Penguins in the playoffs opener on May 5 suited up for Game 6.

Playing a rock solid 13:16 minutes from a believed ankle injury blocking a shot, he finished the contest winning 50% of his draws (7-7) and a +1 rating. Goodrow also added a block, hit, and a shot to his hardhat effort that included killing penalties.

“When I talked to you guys [earlier] you probably thought I was lying,” Gerard Gallant said about Goodrow’s surprise return. “But at that time I didn’t know. I got a call later in the day and was told he’s cleared.”

Goodrow, 29, has been a great fit for the New York Rangers this season after a trade and sign in the summer. In 79 games, he’s recorded 13 goals, 20 assists, for 33 points. All being career highs for the rugged forward.

His presence in the lineup was a boost to the Blueshirts, who needed to put forth their best effort in order to stay alive in this series.

Gallant, looking to inspire his charges started his fourth line centered by Goodrow and it worked. From the opening shift they set the tone and just 7:22 into the game they opened the scoring. Tyler Motte came in over the blue-line and used the Carolina defender as a screen to squeeze a shot through Antti Raanta’s arm. That got the Garden Party started en route to a 5-2 win and a Game 7 on Monday in Carolina.

“Obviously, what he’s done for the last couple of years with the Stanley Cups– he’s a leader and a character guy on our team,” Gallant said. “What he does with his overall play– kills penalties and the whole works. He’s huge for our club.”

The New York Rangers will now lean on his Cup winning experience to win their second Game 7 in these playoffs in Raleigh. 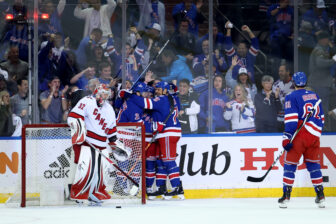 Relive the excitement of the New York Rangers Game 6 win over the Carolina Hurricanes on Saturday night. The series now shifts to Raleigh for the decisive Game 7 on Monday. Read more.