The longest tenured member of the New York Rangers, Chris Kreider attended SmashFest in Stanford, CT this past weekend. Reporters from multiple outlets gravitated to the Blueshirts veteran to get his assessment about what happened with the team and the changes made since they last played.

When the 30 year-old power forward spoke, he noted that despite what some analysts think, these were welcome changes.

Chris Kreider says there’s a buzz around the team

“I think there’s a good energy around the group, like there always is going into the year,” Kreider said via NHL.com. “The group chats have been buzzing and the guys are talking and excited, so it’ll be good… But guys are excited.”

Kreider of course was referencing the changes made from the head coach all the way to the fourth line. “I had a terrific relationship with [David Quinn], I learned a ton from him, I really respect him as a coach, as a person,” Kreider said of his former coach.

Regarding his new bench boss Gerard Gallant, he noted that he’s only heard terrific things about him. “He demands hard work up and down his lineup, as a good coach should,” Kreider explained. “And he’s fair.”

Not every changes was welcomed. Kreider did express disappointment that Pavel Buchnevich is no longer with the team. “I remember him his rookie year, he didn’t speak a lick of English,” he recalled. “That’s the nature of the salary cap and I hate to say I’m numb to it, because I’m not, it still stings.”

Although when Kreider looks ahead, he likes what Chris Drury has added.

“I see guys who compete hard, guys who play north and want to get to the inside,” he noted. “They’ve played within a defined role and know how they can help a team win. When we bring in guys with that level of experience, I think that is incredibly valuable. Understanding the little things, understanding what a winning culture looks like.”

Kreider spent large portions of last season trying to drill a north/south style into the heads’ of his teammates. Unfortunately, he was unsuccessful because the Rangers did not have the personnel to play that way.

Now with the additions of Barclay Goodrow, Ryan Reaves, and Sammy Blais, he see the opportunity for the Rangers to build an identity. “With the guys that are currently here, molding the group that we have to find that place, find that identity so we can win hockey games and ultimately make the playoffs.”

Kreider also dismissed many of the critics that think the Rangers hurt themselves with the changes. The veteran doesn’t it see that way and feels this team is on the right path for contention. 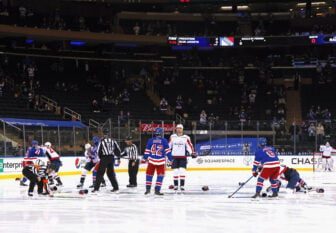 Also Read:
Brendan Smith says there’s more to the Tom Wilson story that will come out one day

Check out the latest NHL Trade Bait Board here.