Former New York Rangers head coach David Quinn has admitted to what everyone saw in his three seasons on Broadway– he overcoached.

“There were things I wish I had done differently,” Quinn said in a feature on NHL.com. “I thought I got away from being who I have been for 28 years as a coach.”

Quinn, 56, built an excellent reputation as an NCAA head coach with Boston University. With the Rangers rebuilding, he was hired for the start of the 2018-19 season to usher in a new era. However, he was often criticized for how he handled high draft picks in Kaapo Kakko (2nd overall, 2019) and Alexis Lafreniere (1st overall, 2020).

“I’ll be honest, that’s the first I’ve heard of it and I’ve coached a lot of young players,” Quinn said at his introductory presser with the San Jose Sharks this summer.

“I think if you want people to be better you have to be demanding but fair,” he continued. “When you have 18, 19 year old players set in their ways, things that they’ve done to get to this point aren’t necessarily what they need to do to continue to have success.”

In fairness to Quinn, he helped Adam Fox develop and win a Norris Trophy in just his second NHL season.

Quinn was fired as coach of the Rangers on May 12, 2021. He posted a 96-87-25 record in his three seasons. His only “playoff” appearance was a sweep in the 2020 Qualifying Round at the hands of the Carolina Hurricanes.

“I’ve got moments that I’m proud of and moments that I regret,” Quinn reflected. “You wish you had some do-overs, that’s for sure.”

“Some of the stuff that’s out there about the Rangers, I don’t think is fair,” Grier noted. “If he just started giving Kakko and Lafreniere first line shifts without them earning it, the Kreiders and Zibanejads of the world would not have been happy with him. I think he handled the situation with the young players as well as he could’ve.”

During the interview with Amalie Benjamin, Quinn stressed he needed to have done a better job trusting his players. He also said that his biggest regret was “coaching this one guy,” but refused to go any further because the player is still in the NHL.

As to whom that player might be, we can only speculate. Although, it was widely reported that there was a disconnect between Quinn and some of his top players on the Rangers.

So was it Mika Zibanejad? Or maybe Jacob Trouba? Your guess is as good as mine.

At the end of the day, it doesn’t matter for the 2022-23 New York Rangers. It does matter to Quinn and the San Jose Sharks, who will be looking to make a playoff return as soon as possible. 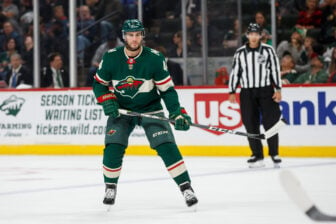 For more information and who should make the cut, read here.