Gerard Gallant is facing Vegas for the first time since his firing on Jan. 15, 2020, after he coached the first 213 regular-season games in franchise history and led the Golden Knights to the Stanley Cup Final in 2018.

Ryan Reaves is also ready to take on his old team after being traded this off-season. Both the coach and the player will be chomping at the bit to get a win tonight.

Considering how popular they are in the locker-room, the Rangers should rally to the cause in a big tilt at the Garden.

Reaves has helped shape the 2021-22 New York Rangers by giving them an element of physicality and toughness they’ve lacked for years.

The Blueshirts acquired Ryan Reaves over the summer for a third round pick. Soon after, they extended the 34 year-old through 2022-23. The extension will be for the same AAV he will receiving this season at $1.75 million. Reavo, as he’s called by teammates has chipped in offensively with 6 assists in 25 games.

As for Gallant, he took the expansion franchise to the Stanley Cup Final in their inaugural season, losing to the heavily favored Washington Capitals. He spent two and half seasons there, amassing a record of 118-75-20, but was unceremoniously fired midway through his third season.

Although Gallant hasn’t said much about the upcoming matchup, the competitor in him is looking for a win. This one would just be a little bit sweeter than usual.

New York, which will be playing its seventh game in 11 days, is 2-3-0 in its past five contests. Before that, the Rangers had racked up seven straight wins.

New York struggled against one of the best teams in the Western Conference when it lost twice to the Colorado Avalanche in a span of four games, and that came when the Rangers had Artemi Panarin on the ice.

On Friday, the Rangers may be without Panarin when they return home and face another high-scoring opponent from the West, the Vegas Golden Knights.

Panarin leads the Rangers with 33 points (nine goals, 24 assists) and is day-to-day with a lower body injury. He played only seven minutes in Wednesday’s 3-2 win over the league-worst Arizona Coyotes. He did not return to the ice after taking a lengthy shift in the opening minutes of the second period.

“You don’t want to lose anyone, but obviously him and his caliber, it’s tough to lose him,” New York center Mika Zibanejad said. “But at the same time, we got to do a job and try to — you can’t really fill that void.”

Without one of their most dynamic playmakers, the Rangers figured out a way to survive his absence and avoid three straight regulation losses for the first time this year.

Kaapo Kakko was moved up the top power-play unit and scored the tiebreaking goal with 2:18 remaining when the Rangers capitalized on a penalty. Kakko also scored in the second period to tie the game at 1, and Zibanejad forged a 2-2 tie when he scored on the power play about 3 1/2 minutes before the game-winner. 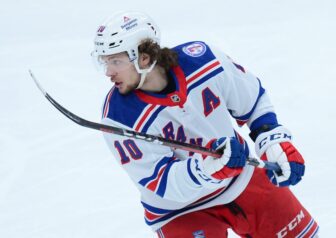 Golden Knights back to winning hockey

The Golden Knights are 6-1-0 in their past seven games and have scored 33 of their 104 goals in that span. On Thursday, Vegas recorded a 5-3 victory over the New Jersey Devils in Newark, N.J. in a game that hardly thrilled coach Pete DeBoer.

“We did just enough to win,” DeBoer said after his team scored at least five goals for the 11th time this season. “We take the two points and move on. I liked our first (period), hated our second, and we were opportunistic in the third.”

The Golden Knights held a 4-1 lead 8:10 into the third on goals by Dylan Coghlan, William Carrier, William Karlsson and Nicolas Roy. They held on in the final minutes after goaltender Robin Lehner got into a fracas with New Jersey defenseman Mason Geertsen in the final seconds.

Despite the win, two Vegas players had scoring streaks stopped. Max Pacioretty had scored a goal in seven straight games, and Mark Stone had a franchise-record nine-game assist streak snapped.

“I think every line feels confident,” Karlsson said. “It’s one of our strengths.”

The NHL Rumor mill has slowed down, but Phil Kessel is still a name out there and one the Rangers are attached to. Read more.