Gary Bettman has once again managed to confound several in the hockey world with his comments on officiating and player safety. During the first intermission of Game 4 of the Stanley Cup Final, Sportsnet’s Ron MacLean asked him his thoughts on the state of NHL officiating and discipline.

Bettman was fair in his assessment of referees, stating they weren’t perfect but they strive to be accountable. On the topic of player safety, he went another direction.

The one incident MacLean noted from the regular season was Tom Wilson’s rag dolling and throw down of Artemi Panarin.

“Well the throw down with Tom Wilson is a question of supplemental discipline,” Bettman answered. “George Parros does a terrific job, and he has tough judgment calls to make. I think he’s been very consistent.”

Let’s look into that consistency, shall we?

The answer is a resounding NO to. Mr. Bettman to calling George Parros consistent. It doesn’t take much research to provide you the evidence as to why.

During Game 1 of the Vegas series against Colorado. Golden Knights forward Ryan Reaves took “justice” into his own hands in front of the Avalanche net.

A scrum broke out in front between Reaves and Ryan Graves. The 34 year-old enforcer first punched goalie Phillip Grubauer in the back of the head before forcefully throwing down Graves and causing an injury. This was believed to be retribution for Graves’ earlier hit that injured Mattias Janmark.

When it was all said and done, Reaves was ejected and received 19 minutes in penalties on the play and was suspended for two games.

However, when you compare what Reaves did to what Tom Wilson was able to get away with during the regular season, it’s mind-boggling.

Here’s Tom Wilson going absolutely haywire with reckless abandon against the New York Rangers. It included a sucker punch, and a scrum where he body slams a helmet-less Artemi Panarin. He was not ejected. 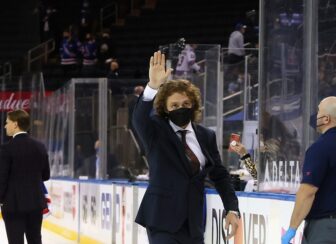 After Wilson sucker punched Pavel Buchnevich, he rightfully was pulled away by Ryan Strome. Wilson then proceed to beat on Strome before Artemi Panarin went in to help. That’s when Wilson went full MMA and rag dolled a much smaller and helmet-less opponent to the ice. If that wasn’t enough, he slammed him down again.

Panarin would miss the remainder of the season while Wilson was assessed a double minor and a game misconduct. I apologize, I almost forgot he was fined $5,000 for punching Buchnevich. That’s it. Nothing for what he did to Panarin.

The Rangers, rightfully angry put forth a statement calling George Parros the head of the NHL’s Department of Player Safety “unfit”. That caused the NHL to get real serious about discipline and fine the Rangers 50 times more than what Wilson received. A Twitter statement cost the Blueshirts, $250,000.

“Public comments of the nature issued by the Rangers that were personal in nature and demeaning of a League executive will not be tolerated,” said NHL Commissioner Gary Bettman. “While we don’t expect our Clubs to agree with every decision rendered by the Department of Player Safety, the extent to which the Rangers expressed their disagreement was unacceptable. It is terribly unfair to question George Parros’ professionalism and dedication to his role and the Department of Player Safety.”

One thing is consistent; Gary Bettman will defend his personnel and rightfully so. He will also unload on any team that would dare criticize them. The Rangers learned that less the hard way.

Note: This article was originally published at The Daily Goal Horn 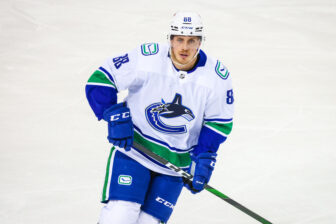