The Hartford Wolf Pack have three games on tap in the final week of December after returning from the Holiday Break. Last week, Hartford went 1-1 against Bridgeport (W) and Springfield (L).

As they look to get out of last place (8th) in the Atlantic Divisions, they have more pivotal matchups against Bridgeport and Springfield (two). It will be crucial for the Wolf Pack to pick up these points against teams they face 12 times each this year.

Entering the final week of the calendar year, Hartford is 10-12-1-4 for 25 points. That ranks the group 14th in the Eastern Conference and 26th in the American Hockey League.

The Wolf Pack are collecting enough points to remain in the conversation and they’re just four points away from the final playoff spot in the division. As we approach the second half the season, games will become more difficult and important to the club.

Through 29 games, the Thunderbirds are 11-13-14 for 27 points. Similar to Hartford, the St. Louis Blues affiliate are struggling despite reaching the Calder Cup Finals last season.

The Lehigh Valley Phantoms hold the final playoff spot in the Atlantic Division. Hartford face the Phantoms in four meetings in the season. The Wolf Pack won the first meeting between the clubs by a final of 3-2 on December 7th.

Entering the week, the Phantoms are 13-11-2-1 for 29 points. The club is ranked sixth in the Atlantic Division. The season series is imperative for Hartford to win as the group has three meetings remaining to collect points against the Phantoms head on.

Fifth place belongs to Wilkes-Barre/Scranton as the club is 13-8-2-2 for 30 points. The Penguins had a strong start to the season but have tapered off. Fourth place belong to the Charlotte Checkers with a record of 14-11-2-1 for 31 points. While those clubs are within reach, Hartford has to have things break their way to gain ground. Relying on the outcome of other games is not optimal but as long as Hartford find ways to collect points they’ll be in it.

Wolf Pack not shy about shooting

One noticeable trend is Hartford’s focused mentality of getting shots on net. In December, Hartford has registered a good number of shots in each outing. As a result, the club is generating more quality offensive chances and goal production.

It’s no coincidence that Hartford’s high in goals of six recorded against Grand Rapids occurred this month on December 16th. In the last four of six games, the Wolf Pack recorded four or more goals. They’ve also won three straight in that span and have won their last four of six outings.

In the two games Hartford lost, one was by a score of 3-2 against Rockford on December 17th. Hartford managed to get 40 shots on net while limiting the IceHogs to 25. That is huge as the IceHogs are a superb team in the AHL and have one of the best offensive groups in the league.

In his last contest with Hartford, Carpenter notched two goals to give Hartford a 4-3 win over the Bridgeport Islanders last Friday. The veteran is climbing his way up in the points column.

Carpenter has four goals and one assist in 7 games this season. For a group that struggled for offense, he continues to provide benefits in that department. Carpenter currently has points in the last two of four games. Carpenter recorded six shots on net (his highest thus far) last Friday against Bridgeport.

The 22 year-old prospect continues to develop well with Hartford. In his second full season in the AHL, Emberson is noticeable in the defensive and offensive zones.

December has been a good month for the young defenseman as he’s found himself on the scoresheet on multiple nights. Emberson has three goals and three assists in the last six of eight outings.

Last Thursday featured his first multi-point game of the season with one goal and one assist. As we approach this week, Emberson is tied for third in points with Will Cuylle and Tanner Fritz.

On his defensive game, Emberson has had a few strong hits and continues to block shots. He’s reliable on the blue line with a rating of +7. What’s impressive about his game is he doesn’t get caught up in plays as reads them well.

I expect his development to further progress. 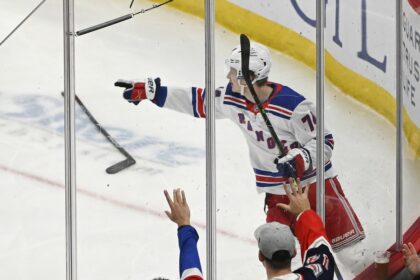