When Henrik Lundqvist was forced to retire from the game of hockey after a heart condition that required surgery, it was a somber day.

At the time, the New York Rangers told him that he had a place at the World’s Most Famous Arena but he wasn’t ready to take the job just yet.

“I don’t know if it happens now. I have some investments here at home and away in the US that I want to get more involved in,” Lundqvist said after announcing his retirement in Sweden on August 20, 2021. “I will sit down and talk to Rangers about the future – but whether it’s now or later, I don’t know.”

It appears that time has come.

“During the past year since I announced my retirement, I have enjoyed the opportunity to explore many different areas of the sports and entertainment industry and I look forward to continuing on that path,” said Lundqvist in a new release. “At the same time, I am a Ranger at heart, and Madison Square Garden is my home. I am thrilled to continue my relationship with MSG and the Rangers in this exciting, expanded role.”

On Thursday, MSG Sports and MSG Entertainment announced Lundqvist will take on a new role as Ambassador of Madison Square Garden.

Per the Press Release:

Madison Square Garden Sports Corp. (NYSE: MSGS) (“MSG Sports”) and Madison Square Garden Entertainment Corp. (NYSE: MSGE) (“MSG Entertainment”) announced today that New York Rangers legend Henrik Lundqvist will be joining both organizations in a unique new role that helps support business operations for each company. In this position, Lundqvist will be involved in numerous areas including representing MSG Sports and MSG Entertainment in a variety of partner and sponsorship endeavors, assisting with content development for digital platforms across both companies, growing and strengthening the connection with Rangers alumni, as well as lending his support with the Garden of Dreams Foundation. In addition, Lundqvist will once again be a lead studio analyst on MSG Network throughout the Rangers season.

“I’m so grateful and excited to start my new role as Ambassador of Madison Square Garden,” Lundqvist wrote. “I look forward to working with the amazing people within The Garden family and participating in a variety of new endeavors.” 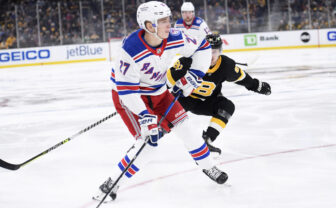 Also Read:
Rangers have an offer for Nils Lundkvist, should they take it?

In the end, having his jersey retired was just another crowning achievement in a brilliant and compassionate career that spanned 15 years. All of them with the New York Rangers.

“Over a year ago, I retired from the game of hockey,” Lundqvist said. “It’s been a great year and I’ve done a lot of different things in New York and overseas in Sweden. And now is the time to get more involved at the Garden.”