How to watch Rangers vs Red Wings on TNT, plus matchup stats

How to watch Rangers vs Red Wings as they play on TNT. The Blueshirts will look to put some pace between them and the Penguins while closing the gap for first place held by the Hurricanes by 5 points.

This marks the last multiple game road-trip for the season.

Alexandar Georgiev is the likely starter for tonight’s game and has never faced the Red Wings.

Saving Grace: The Rangers lead the entire NHL in Save Percentage. Shesterkin and Georgiev have combined for a .919 SV%.

Full 60: The Rangers, Avalanche, and Maple Leafs are the only teams in the NHL with 4 players with 60 points or better. (Panarin, Fox, Kreider, Zibanejad)

Comeback Kids: The Blueshirts are 1st in comeback wins at 23. 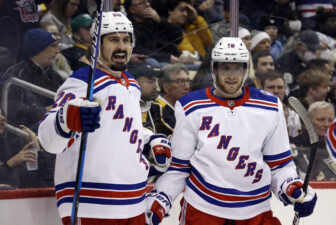