Igor Shesterkin took home his first Vezina Trophy as the league’s best goalie by a landslide this past season. Out of 32 NHL general managers, he received 29 first-place votes to beat out Jacob Markstrom of the Calgary Flames and Juuse Saros of the Nashville Predators.

New York placed second in the Metro Division after going 52-24-6 for 110 points. They then came back from a 3-1 series deficit to beat the Penguins in Round 1 and followed that up with a 3-2 series deficit win against the Hurricanes. The Rangers would ultimately fall to the Lightning in the Eastern Conference Final.

In an an interview with Russian media outlet RBC, Igor Shesterkin discussed last season and a few other topics. When asked if he felt the Rangers should have been in the Final over Tampa, Igor noted how playing 20 games in 40 days was a factor.

“Perhaps, there was not enough experience, freshness,” he said. “Of course, I would like to play in the final. But, on the other hand, we gained invaluable experience that will be useful to us in the future.”

One trait any top goaltender in the NHL shares is an ability to put a goal against behind them and focus on the next shot. For Shesterkin, that holds true about going into next year as well.

“We need to forget everything that happened last season and prepare for the new campaign with a cool head,” he stated. “I’ve already started training. I’m waiting for the form [from the Rangers trainers] to be sent, then I’ll start going out on the ice.”

Shesterkin also wanted to add that although the team needs to put what happened behind them, he feels the Stanley Cup is within reach.

“Yes, from year to year the goal is the same,” Igor explained. “We got good experience last season. I think we have a chance. The main thing is to believe in it.”

This season, Igor will have a new partner to tend goal with in New York. Alexandar Georgiev is now a member of the Colorado Avalanche with veteran Jaroslav Halak leaving the Vancouver Canucks via free agency to take his place.

“Competition with any goalkeeper should spur you on, because without it there is no professional growth,” Shesterkin began. “Now our team has signed Jaroslav Halak. I am sure that the competition will also be serious, plus you can learn something from him, as he is a very experienced goalkeeper. And I wish Alexander Georgiev only good luck.”

Furthermore, Halak is 24-9-1 for his career against the Rangers. By far the most wins against any team he’s faced (two teams tied at 15).

Vitali Kravtsov is ready to make his mark on the NHL and the New York Rangers after a tumultuous few years. He and Chris Drury have put the past behind them in hopes of the former first-round pick earning a spot in the lineup.

“I hope he does well next season,” Shesterkin said. “We’ve been waiting for him to arrive.”

When it comes to Russian superstars, two elder statesmen are considered hockey royalty in Evgeni Malkin and Alex Ovechkin.

At one point, Malkin was looking like he was going to become a free agent with the Rangers as a potential landing spot.

“Of course it would’ve been great,” Shesterkin admitted. “But Evgeni has spent his entire career in Pittsburgh. It was better for him to continue playing there.”

As for Alex Ovechkin, he’s chasing down Wayne Gretzky’s all-time NHL goal mark of 894. There were doubts last season if he would be able to overcome The Great One, but after recording 50 goals at the age of 36, there’s little doubt.

“Personally, I think that he will succeed. But I’m not going to help,” Igor laughed as Ovechkin sits 114 goals behind Gretzky.

In 5 career games against the Capitals, Shesterkin has yielded just two goals to Ovechkin. He also has a strong 4-1 record against Washington with a 2.22 GAA and a .935 SV%.

Bottom line, Alex shouldn’t be expecting to gain much ground when facing Igor.

Note: Quotes from RBC Interview with help from Google Translate 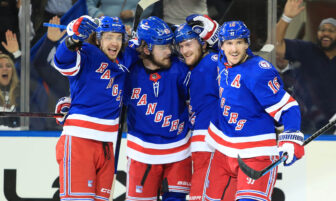