The last New York Rangers goalie to win the Vezina Trophy was legendary franchise goalie Henrik Lundqvist in 2012. That season, The King posted a 39-18-5 record with a jaw-dropping 1.97 GAA and a stellar .930 SV% (the highest of his 15 year career).

On Tuesday, the NHL announced its three finalists for this year’s honor.

The Vezina is named after Montreal Canadiens star goalie Georges Vezina and has been awarded by the NHL since the 1926-27 season. It is presented “to the goaltender adjudged to be the best at his position” and voted on by all 32 NHL General Managers.

The winner will be announced during the Conference Finals and Stanley Cup Final.

This season, Shesterkin posted a 36-13-4 record to lead the Rangers to the playoffs and second place finish in the Metro Division. His .935 SV% and 2.07 GAA lead the league.

The 26 year-old’s save percentage was the best for a Rangers goalie in a single season with a minimum of 30 appearances. According to the Rangers Press Release: “Among goaltenders who played 50 or more games, Shesterkin had the third highest save percentage in NHL history behind Tim Thomas (2010-11 – .938) and Dominik Hasek (1998-99 – .937). Both Thomas and Hasek won the Vezina Trophy in those seasons.”

Should Igor win the Vezina, he will be only the sixth Rangers goalie in franchise history to do so:

Per Vegas Insider, Shesterkin is the clear cut favorite at -4000. His competition is a distant second with Calgary’s Jacob Markstrom at +3300. Juuse Saros was listed with the fifth best odds at SportsBettingDime at a +6000.

Markstrom (37-15-9, 2.22 goals-against average, .922 save percentage) posted a League-leading nine shutouts in 63 appearances, surpassing the eight career shutouts he had recorded over 315 games entering the season. He jump-started the Pacific Division-winning campaign for the Flames (50-21-11) by becoming the first goaltender in franchise history to notch three shutouts in a four-game span (Oct. 21-30), highlighted by a 45-save effort Oct. 28 at Pittsburgh. Markstrom finished third in the race for the William Jennings Trophy, with only the Hurricanes (202) and Rangers (207) sporting a lower goals-against total than the Flames’ 208. Markstrom is an NHL Awards finalist for the first time. He is the first Flames netminder voted a Vezina Trophy finalist since Miikka Kiprusoff (t-3rd) in 2006-07 and is aiming to become the second winner in franchise history, following Kiprusoff in 2005-06.

Following five seasons in tandem with Pekka Rinne in the Nashville net, Saros claimed the starter role in 2021-22 following Rinne’s retirement and recorded 38 of the Predators’ 45 wins, the highest percentage (84.4%) among all NHL goaltenders. He backstopped the Predators (45-30-7) to their eighth consecutive playoff berth by leading the NHL in appearances (67), all of them starts, and total ice time (3,931:23); ranking second overall in shots against (2,107) and saves (1,934); and third in wins. The 27-year-old also won three of his four shootout appearances, stopping 11 of 12 attempts for a .917 save percentage. Saros (38-25-3, 2.64 GAA, .918 SV%, four shutouts) is a first-time Vezina Trophy finalist and joins Rinne as the second netminder in franchise history so honored. Rinne was a four-time Vezina finalist, capturing the award in 2017-18, finishing second twice and third once.

Shesterkin posted a League-leading 2.07 goal-against average and .935 save percentage, helping the Rangers (52-24-6) reach 110 points, the third-highest total in franchise history. He recorded the seventh-best save percentage among all NHL goaltenders since the statistic was first officially recorded in 1955-56 (min. 25 GP) and became the second Rangers netminder to top the save percentage chart, following Gump Worsley in 1957-58. He went 36-13-4 with six shutouts in 52 appearances, recording his 30th win of the season in his 41st game – the fewest games required in franchise history. A first-time Vezina Trophy finalist, he is the first Rangers netminder voted in the top three since former teammate Henrik Lundqvist, who made five finalist appearances and took home the trophy in 2011-12. Shesterkin is vying to become the third Rangers goaltender to win the Vezina under the current selection criteria (since 1981-82), joining Lundqvist and John Vanbiesbrouck (1985-86). 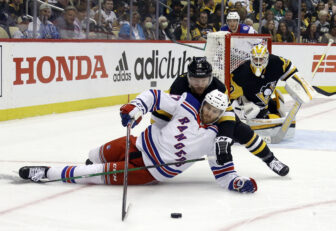 Are the New Jersey Devils going to make a run at Kevin Fiala in the offseason? Read More.