Jacob Trouba has been the New York Rangers captain for five games and last night he made a statement through the media in his post game scrum.

“That’s not a formula that’s going to breed success in this league,” Trouba said. “You look at successful teams they’re good defensively and when the offense comes it comes. That defensive piece needs to get dialed in. We’re trying to create too much with defense jumping in when we don’t need to. It’s not an offensive free-for-all, it’s a hockey game. We’ve got to play defense too.”

The Blueshirts were at the top of their game defensively against the Tampa Bay Lightning to open the season. After scoring 7 goals in Minnesota, they started believing their own hype and have gotten looser with the puck.

It burned them in the third period of a 4-1 loss to the Winnipeg Jets. Many chalked that up to playing three games in four nights as head coach Gerard Gallant also said they ran out of gas. The team returned home and dropped six goals on the Anaheim Ducks, but did give up two sloppy goals in the third period.

It’s something the team is going to need to fix.

Jacob Trouba and Gerard Gallant not happy with defensive play

To a man, many of the Rangers admitted that they need to work on cleaning up their play in the defensive zone.

In the third period, the Sharks took it to a frustrated Blueshirts squad almost doubling their shot total through two periods. From the start of the final 20 minutes and into OT, San Jose peppered Igor Shesterkin with 18 shots to the Rangers 2 before Erik Karlsson won it.

“Just a little too sloppy in transition, breaking pucks out,” Trouba explained. “You’re not going to be on every night, but you’ve got to know how to play your game and adjust your game when you don’t have it. You’ve got to simplify a little bit. I don’t think we did that.”

Head coach Gerard Gallant didn’t know whether to laugh or cry after the game. During it, MSG cameras caught him seething on the bench as his frustration was mounting with his team in the third period.

“I was pretty happy with the first two periods,” an flabbergasted Gallant began. “We didn’t execute as we usually do on the power play and got frustrated a little bit, but we still pretty well dominated the play. So we were in good shape, we played well, but that third period, I have no idea where that came from. I have no idea what went wrong. It was just a total collapse. It was embarrassing, actually.”

The New York Rangers will have a day off today, but come the weekend it will be serious business for the group.

Another below .500 team comes to town in the form of the Columbus Blue Jackets. After beating two top contenders in Tampa and Minnesota by a 10-4 margin, the Blueshirts are 1-1-1 against three non-playoff teams from last season (Winnipeg, Anaheim, and San Jose). They’ve allowed 11 goals in those contests and only scored 9.

“We’re going to talk about this one when we get back to work on Saturday,” Gallant noted. “We got a point out of it, but in the third period we were pretty bad. I don’t expect to see that kind of period again.” 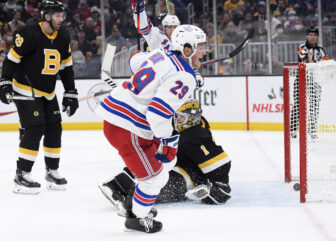