New York Rangers defenseman Jacob Trouba has been the focus of a lot hockey writers in these playoffs.

It all started with an incidental collision against Sidney Crosby of the Pittsburgh Penguins in Game 5 of their opening round series. The puck was in the slot near Crosby skates when Trouba made a stick check that caused his left arm to chicken-wing and catch #87 in the chest.

Trouba being a solid 6-3 and 210 lbs, knocked Crosby out of the remainder of that contest and Game 6. The Rangers were also down 3-1 in the series and stormed back to win it in 7.

“It was a play in the slot and obviously the great player that Sid is he does a lot of spinning away from guys,” coach Gerard Gallant recalled. “Trouba went to go play the puck and his elbow got a little high. But there was no intent and he wasn’t trying to hurt him.”

Penguins’ head coach Mike Sullivan had a different opinion, as does the Pittsburgh media to this day.

“Did you see the hit? Then you probably have the same opinion I do,” Sullivan said angrily.

Meanwhile, the refs on the ice and the NHL DoPS saw no foul on the play.

The 28 year-old Trouba laying the body on opposing forwards is nothing new. He’s a throwback that Gallant compared to hard-hitting blue-liner Scott Stevens, who played for the Capitals, Blues, and Devils from 1982 to 2004.

“Jacob’s a clean hockey player who plays a hard game,” he said before the ECF began. “He plays a good honest game. He’s not trying to hurt people out there.”

But unfortunately for some players this season, that’s been the end result when they unwittingly get caught on Trouba’s train tracks.

Chicago Blackhawks forward Jujhar Khaira was the first player to really get caught this season. He was coming out of the zone with his head down and Trouba hit him square in the chest. Khaira landed on IR afterwards with a concussion.

Another incident involved Colorado Avalanche forward Nathan MacKinnon, who also had his head down in the slot when he was caught by Trouba with a shoulder to the chest. MacKinnon left the game but was able to return.

The most recent incident occurred in Game 7 against the Carolina Hurricanes when young Seth Jarvis was looking down at the puck before Trouba nailed him hard. He was knocked out of the game, which the Rangers won easily to advance to the ECF.

For the record, Trouba was suspended once in his career for a hit to the head of Mark Stone in 2016-17.

“I don’t really think much about it, I guess,” Trouba said. “I play the way I’ve always played.”

These big hits are one of the main reasons why the Rangers traded for him for Neal Pionk and a first-round pick in 2019. They were looking for a tough shutdown right defenseman who could also chip in offensively.

That’s exactly what they got and a big reason why the Rangers are two wins away from the Stanley Cup Final.

Trouba does play the game clean and isn’t going to pass an opportunity to hit someone no matter who they are. Superstar or fourth line grinder, if you’re on the tracks he’s going to nail you and not worry about the narrative from anyone outside of the dressing room. 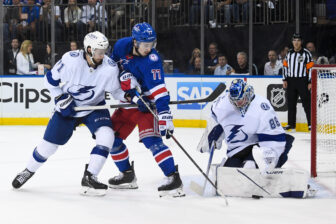