After a three game hiatus, Julien Gauthier will make his way back into the New York Rangers lineup in tonight’s final regular season clash with the New York Islanders.

Per Newsday’s Colin Stephenson, both Sammy Blais and Libor Hajek stayed on after practice indicating they will be tonight’s scratches.

The 25 year-old forward last played in the Rangers 3-1 victory over the Maple Leafs on December 15. For the season, he has four goals and six points in 23 games.

Julien Gauthier in for Sammy Blais

According to multiple reports, Gauthier will return to the fourth line right wing, shifting Vitali Kravtsov over to Jonny Brodzinski’s left side.

Sammy Blais, who has no goals in 44 career games with the Rangers since being acquired from the St. Louis Blues along with a now jettisoned second round for Pavel Buchnevich, is being scratched.

A retaliatory punch by Blais to the face of Brock McGinn led to a Bryan Rust goal on the on the power play with just 13 seconds left on the clock in the team’s 3-2 loss to the Pittsburgh Penguins on Tuesday. While that wasn’t the only reason why the Rangers 7-game winning streak game to an end, it played a huge role.

Blais was benched for the rest of the game after that roughing call.

As for Gauthier, he’s in a similar boat as Blais fighting for a place in the lineup. Both players will be unrestricted free agents in July.

The Quebec native did not start the year with the big club and earned his way back with a call up in late October. He’s been a solid contributor ever since.

Igor Shesterkin is expected to start. 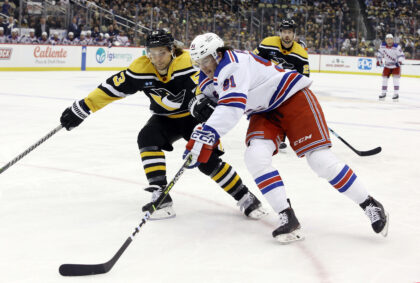