K’Andre Miller is opening eyes on Broadway and all around the hockey world with his excellent play this season. The Athletic’s Corey Pronman ranked 154 players and prospects under the age of 23 from all 32 NHL teams with 5 New York Rangers making the list.

“This is a ranking meant to show who I think will have the best pro careers,” Pronman explains. “Not who I would take in a game tomorrow.”

At the top of his list are Buffalo Sabres defenseman Rasmus Dahlin, New Jersey Devils center Jack Hughes, and Ottawa Senators forward Tim Stutzle respectively. You could argue the order all you like, but that’s a fair assessment as far as I’m concerned.

The Athletic’s list criteria is really simple, the player just has to be 22 years-old or less by January 1, 2023. That’s why Vitali Kravtsov did not qualify as he turned 23 on December 23rd.

Usually when I look at the Rangers prospects, my criteria is 23 years or younger. However, once they’ve spent some decent time in the NHL I focus on who the organization has up and coming.

Pronman also gives a scorecard for each player’s abilities and provides detailed analysis as well in his article, which you can read here (subscription required).

Editor’s Note: Updated the headline and article to better reflect criteria of Top Players and Prospects under 23

Breaking down the rankings

Breaking down the list, it’s reasonable to suggest Miller will have a better career than both Lafreniere and Kakko with the way Pronman decided to do his rankings.

The reality is, both Miller and Schneider play decent minutes every night. It’s simple math, there are 12 forwards and only six defensemen in a game. Additionally, there was no one aside from Ryan Lindgren blocking Miller’s path on the left side. As for Schneider, he supplanted Nils Lundkvist quickly forcing the latter to be traded.

When it comes to Kakko and Lafreniere, you could say if not for the draft lottery neither would be on the Rangers. In 2019 the Blueshirts jumped up from 6th to 2nd to take Kakko. That was followed by a huge jump from 11th to 1st in 2020 for Lafreniere.

The NHL literally changed the rules after that!

Since the Rangers won it back to back, no team can jump up more than 10 spots. In addition, no team can win the lottery more than twice in a five year period and they reduced it to from three winners to two.

The point I am poorly trying to make is that the Rangers weren’t a bottom feeder team void of talent. Especially in the case of Lafreniere, where Artemi Panarin and Chris Kreider are still ahead of him on left wing.

So in the end, either Lafreniere or Kakko may go on to have better career. That makes K’Andre’s high ranking even more meaningful as he’s already surpassing expectations with a vast amount of great potential still ahead. 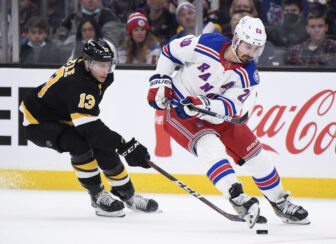 Also Read:
Chris Kreider ‘real close’ to a return with clash against Bruins next