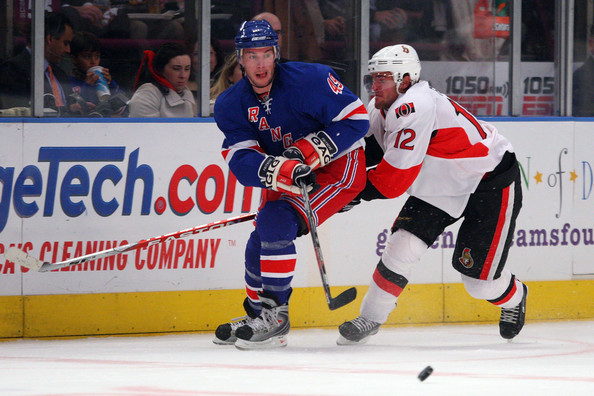 90 years of existence, the Rangers have had a plethora of players come and go through the gates of Madison Square Garden. Some names known and some not so popular and some you probably had no idea played for the Rangers, or didn’t even remember their time here. Lesser Known Rangers dives into this topic by looking into players to whom you had no idea donned a Blueshirt. So strap yourselves in and prepare to take a trip down obscure hockey player avenue! Let’s begin!

The answer to the question “Who wore 61 before Rick Nash?” would be none other than Pascal Dupuis. Yes, that Pascal Dupuis. Sidney Crosby’s Two Time Cup Winner Pascal Dupuis. In one of the more forgettable blips in Rangers history, Dupuis was traded to the Rangers on February 9th, 2007 for Adam Hall. In six games, he scored one goal. The stats sheet says he did but there’s no video evidence of it, so it must be dug underground or Pascal doctored the score sheet to reflect SOMETHING during his time as a Ranger.

All kidding aside, Dupuis did not make any discernible impact on the Rangers in his 6 appearances, which led to him being dealt not even a month later on February 27th of that same year to the Atlanta Thrashers for winger Alex Bourret. Dupuis would stay with Atlanta for a season and half before being dealt to the Penguins a year after he was dealt twice. The rest is history from there. Dupuis contributed to the 2008 Stanley Cup run where they lost to Detroit, then won the following year, also against Detroit.

Dupuis would go on to become one of the more reliable Penguin forwards over the next few years, teaming up with Sidney Crosby, Evgeni Malkin and co to provide scoring depth for some solid Penguins teams. Sadly, Dupuis was diagnosed with blood clots, then after a few injuries and complications from said clots, Dupuis retired mid way during the 2015-16 season, but fortunately for him, he was able to raise the Stanley Cup with his mates later that summer.

Toughness was something the Rangers lacked back in early 2009, especially on the defensive end. The Rangers sent Center Dan Fritsche to the Minnesota Wild for Defenseman Erik Reitz, who was hailed as someone who was tough and hold his own by former Rangers coach Tom Renney.

“He’s got some toughness, he’s got an edge to him. I don’t know if that’s his forte, quite honestly, but…he can take care of himself, stand up for his teammates,” the coach said of Reitz, who had a goal, an assist and 41 penalty minutes for the Wild this season. “What we think we’ve done is we’ve added a dimension to our team with respect to his edge that we can use on the back end.” Michael Obernauer/ NY Daily News

In his Earth shattering 11 games with the Rangers, he had a plus/minus rating of -4 and somehow managed to rack up 24 penalty minutes. In a move that shook the core of Rangers town all the way to our socks, he was waived by the Rangers just two months later by the Toronto Maple Leafs. I honestly wish I can tell you more about him off memory but there was no discernible thing or moment that stood out about him as a Ranger. I can’t say much though, as he’s a former NHL’er and I’m just a guy behind a computer!

A throw in by Columbus, Fritsche was dealt to the Rangers, along with professional on ice enigma Nikolai Zherdev for Fedor Tyutin and Christian Backman back on July 2nd, 2008. The main piece of that trade of obviously Nikolai Zherdev, who displayed a tremendous amount of skill with Columbus, while Fritsche was a throw in, seen as a potential depth player for the team. While Zherdev stood out in some sense with the Rangers, Dan Fritsche did not.

In his 16 games as a Ranger, he only scored 1 goal and 3 assists. He was a healthy scratch for 22 of the 23 games up January of that year. This led Rangers brass to move him to Minnesota for Erik Reitz (see above, please) on January 29th, 2009. I feel in my honest opinion, I’ve left bigger dents on the sides of cars while driving than the dent Dan Fritsche left on the Rangers lineup that season.

Fortunately for him, after a few stints in the AHL, he seemed to find his niche in Switzerland. Fritsche played three seasons with Geneve-Servette HC, HC Lugano and currently the ZSC Lions, all in the top tier Swiss league, the NLA.

On November 29, 2013, Fritsche was traded to the ZSC Lions, who were then coached by current Ottawa Senators assistant coach,  Marc Crawford. Zurich won the 2013–14 NLA title and Fritsche played a huge role in getting four points in four games during the championships that year.