In March, Marty St. Louis’ arrival to the New York Rangers came with a bit of shock. Fair-weather Rangers fans asked themselves, “Who is Marty St. Louis?” Well, if you’ve been living under a rock, Quebec-born St. Louis, is a forward for the Rangers but had a very hefty career with the Tampa Bay Lightning that was left estranged after one Stanley Cup win, Olympic drama and 14 years of loyalty. New York needed a hero and we found one in St. Louis.

For the past few seasons, our boys in blue were suffering a slight drought, the Rangers haven’t won a Stanley Cup in 20 years, they lost the last in the last two playoffs to two strong rivals: the New Jersey Devils and the Boston Bruins, and the club found itself in the middle of a contract dispute (a difference of half a mill a year) with its Captain, Ryan Callahan.

Whilst in Tampa, St. Louis had expressed an interest in playing for the Rangers wishing for a trade citing “family reasons.” When he was snubbed for a second consecutive Winter Olympics for Canada’s national team, the interest to join the Rangers became a dead-set goal.

My years in Tampa were some of the best in my life and I have a lot of respect about how the organization handled everything. I think Tampa is in a good position and, unfortunately, for me, it was time to experience something else. I know people will question and judge, but this decision was based on what is best for me and my family and I think that I have done a lot and earned that right and I am looking forward to my time in New York.
-St. Louis to TSN 1260 in Edmonton.

The US Team, touting players such as Blackhawks’ Patrick Kane, Kings’ Jonathan Quick and former Ranger Ryan Callahan, didn’t even medal. Two weeks later, Callahan was out, St. Louis was in and the rest is history. St. Louis set the fire under the New York Rangers and the team fought hard but ultimately lost to the better playing team, the LA Kings.

We had some tough series early on, some game sevens and we were able to finish Montreal in six and move on to LA. That LA series didn’t feel like a five-game-series, it felt like a seven-game-series with the OT games. Not to take anything away from LA, they played really well but two double OT games, the bounce of the puck can go either way. It was a little disappointing that way but coming from Tampa to NY, I was envisioning nothing but that, Stanley Cup Final.
– St. Louis to TSN Radio 690 in Montreal.

Callahan wasn’t the only one sent to Tampa Bay. Anton Stralman, also had contract complications with the Rangers, was sent packing to the Gulf Coast. Defensemen (and fan favorite) Brian Boyle went on his own accord for a nice $6 million for three years.

To understand how important these moves are for the Rangers, one has to think about New York City. It’s a big market city with countless national teams, but the fans are reasonably faithful, at best. 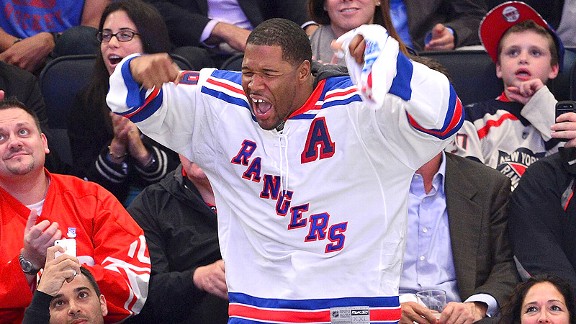 Rangers fans won’t burn the city down with a championship win, but we may toilet paper a couple trees in a neighborhood. You’re a fan of a team and if they do well, great, if they don’t, well…okay, I guess. It’s New York, no one has time to dwell in great losses or daydream of great wins. However, Ryan Callahan, who in the middle of a contract dispute, found himself with a one-way ticket to Tampa Bay. If we can learn something from PK Subban in his one-day contract negotiations that earned him more than he asked for, it’s that Montreal fans were vocal enough about their love for him to convince the club of his value to the team. It wasn’t so, in New York.

New York is the place you go when you feel like lighting the world on fire and burning some bridges along the way. It’s a rock and roll city, it’s a hardworking city, it’s an everyman city, but now it’s “The Marty Show.” An aging hockey player with a few years left in him is now in a big market team and still looking for Cup glory.

With success comes responsibility. Every building that you go in, they try to beat the East Champs. I have had that experience before. Players that you play against get up for those games. The staff prepares their team for those games. We understand that.
-St. Louis to TSN Radio Toronto

St. Louis had a short summer after the loss to LA, he trained hard with his trainer, Ben Prentiss, in Connecticut, his took part in the ALS Ice Bucket Challenge and now is busy promoting Crest Sensi with his beautiful wife, Heather.

For Rangers fans, who only got a preview of the greatness of St. Louis in a truncated season, let’s hope for more greatness in a full season at the Garden and with a Stanley Cup in 2015.