The New York Rangers called up Greg McKegg prior to tonight’s contest against the New York Islanders in Bridgeport, Connecticut.

Head coach, Gerard Gallant also announced before the game that Vitali Kravtsov will indeed participate. He will return back to his third line spot on the right side of Filip Chytil, opposite Barclay Goodrow. “He’s ready to go and he’s skated the last two days and looks real good,” he said.

The return of Kravtsov is great to see. Gallant was also asked if he is still under evaluation to make the team, with the head coach stating him and others still are.

Alexandar Georgiev will get the start in goal and is expected to go the distance. Last season, Georgiev posted a 8-7-2 record with a solid GAA of 2.71 and SV% of .905. For his young career, he’s registered a 43-38-9 record with 6 shutouts, a 2.95 GAA, and .912 SV% in 96 games played. Solid stats which are more notable since he posted them in the middle of a Rangers rebuild.

“I want to take a step forward,” he said yesterday. “I’m excited for the season and I want to play as much as possible.”

The official line up is not yet set, and it is possible some of the top regulars could sit. That included Artemi Panarin and/or Mika Zibanejad.

Gerard Gallant confirmed Ryan Reaves is day-to-day. Whether or not he can play on October 13th, against the Washington Capitals remains to be seen.

“When it happened it didn’t look good but I think it’s day-to-day for us,” the coach said. “When he left the game I said, ‘no,’ but the last couple of days it’s going in the right direction. I can’t really say, but it’s going to be real close – from the info I got.” 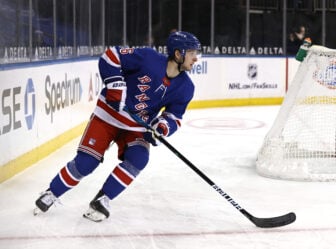