The New York Rangers are 1-0-1 on their four-game road trip as they prepare to take on the Los Angeles Kings.

Things started off a little rocky against the Seattle Kraken in a 3-2 OT loss, but the team did find a way to tie it late in order to get the point. A let up in the final minute of play against the San Jose Sharks on Saturday, put a blemish on a near perfect performance in a 2-1 victory.

“I think our team has played okay this season,” Gerard Gallant said on Monday. “We’ve had two or three games I’ve liked. If we could be more consistent and play 60 minutes we’ve got a good chance to win every night. I loved our last game in San Jose.”

The Thanksgiving holiday is nearly upon the NHL and the stats say if you’re in a playoff spot come Turkey Day you have a 77% of staying there.

As of start of play today, the Rangers hold the final wild card spot in the East by one point over the Pittsburgh Penguins. They’re also playing the first game of a back-to-back with the Anaheim Ducks on tap for tomorrow night.

As for tonight’s lineup, it appears very much like it will remain the same as it has the last few games. That means Igor Shesterkin should start and Vitali Kravtsov will remain out even though he’s been cleared to play for the last two.

“I have an idea, but i don’t know when it’s going to happen,” Gallant said about Kravtsov. “He’s had some unfortunate luck. Right now, I’ve liked the way our team is playing. It’s going to happen– he’s going to play. We want to give him every opportunity.”

The 22 year-old forward has just one assist in six games played this season. His latest injury was a tooth infection that’s kept him out since November 11.

Gallant is addressing the media around 8:30 PM ET tonight and will likely provide more lineup information. 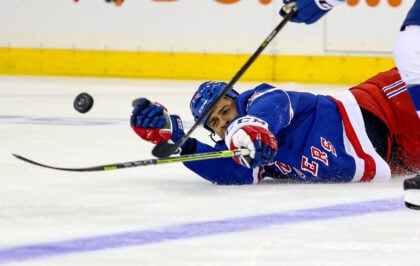 Kings will be hungry

The Los Angeles Kings have lost two in a row but maintain their hold on second place in the Pacific Division. Currently, they are tied with the San Jose Sharks for most games played in the NHL with 21. Although, the Sharks started in Europe almost a week earlier.

This will also be the Kings first home game after a long four-game road trip and their 11th contest in 22 days.

Despite the fact the Kings could be tired, the Rangers can’t take their foot off the gas.

Kevin Fiala leads all Kings scorers with 18 points in 21 games, while Gabriel Vilardi leads the team with 10 goals. 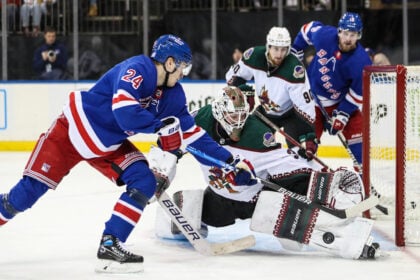