Are the New York Rangers getting enough respect in these playoffs?

The New York Rangers finished the regular season with 110 points on the strength of 52 wins. The defending Stanley Cup champion Tampa Bay Lightning also had 110 points but with 51 wins.

If these two teams meet in the Conference Final, it’ll be the Rangers with home ice advantage. So why do the oddsmakers and experts still seem to dismiss them as contenders.

I mean, did the New York Rangers not comeback from a 3-1 deficit against the Pittsburgh Penguins? A team that finished the season with 103 points. Are they not even with the Carolina Hurricanes in their best-of-seven series outscoring them 8 to 6 to this point? Yet they continue to be disrespected.

The New York Rangers started these playoffs at a +1600 per Vegas Insider. That had them tied with the Boston Bruins at 7 out of 16 teams in the playoffs.

Since then, 9 teams have been eliminated including one of the early favorites the Florida Panthers.

In the Eastern Conference, the Rangers were tied with the Bruins at 5 to win the East. Boston along with the #1 ranked Panthers and #4 Toronto Maple Leafs have been vanquished.

So why are the Rangers the 5th ranked team to win the Cup at +1200 odds? And why are the Carolina Hurricanes at a +600 when the teams are even at two games each with the Rangers having all the momentum?

Try this on for size, the website MoneyPuck has the Rangers at a 31.4 % chance to make it to the third round and the Hurricanes are at 68.6%. The Calgary Flames, who could be eliminated tonight by the Edmonton Oilers have a 13.8% chance to advance.

However, when you look at which team MoneyPuck considers more likely to win the Stanley Cup it’s Calgary at 3.9% to the Rangers 2.4%.

Why are the Rangers being disrespected?

Honestly, there can only be one reason why the Rangers are constantly overlooked and it comes from the advanced analytics community.

All season long the narrative is that the Rangers are Igor Shesterkin and a really good power play– not much else. This season, they were ranked 25th in CF% at 47.1. That was way off the leaderboard led by the Florida Panthers 56.5%.

By the way– where are the Panthers now? The number two team, the Carolina Hurricanes seems to have their hands full with the Rangers in this series. The Calgary Flames, who finished third are one win away from elimination and the 6th ranked Toronto Maple Leafs did their annual first round exit.

In the playoffs, the Flames have the best CF% AT 60.7 but are down 3 games to 1 to the Edmonton Oilers (48.9 CF%). ThePanthers by the way had a CF% of 57.7 in the postseason. You know what else they have? Tee times scheduled for Memorial Day weekend.

Guess who has a worse playoff CF% than the New York Rangers 46.7%? That would be the Tampa Bay Lightning at 45.4% but they have the second best odds to win the Cup.

Listen, I appreciate all these numbers as corsi is just a complex way of saying the team that has the puck more than the other team usually wins.

Although, the Rangers deserve a lot more respect than they’ve been shown in these playoffs. They were one of the most resilient teams in the NHL with 27 comeback wins during the regular season. In the playoffs, they won three straight elimination games to the Penguins, and have won two straight to even the series against the Hurricanes.

The Rangers deserve more respect but I wouldn’t hold my breath waiting for the experts to give it to them. 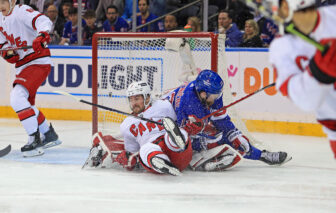 The Florida Panthers have been eliminated from the playoffs. What’s next for them and goalie Sergei Bobrovsky. Read more.