The New York Rangers organization made it a point that Libor Hajek be added into the Ryan McDonagh blockbuster deal back in 2018. According to multiple reports, the organization so coveted the young defenseman that they sweetened the pot by adding J.T. Miller in the package.

Miller has gone on to be one of the Canucks top forwards, and Hajek to date continues to fall lower on the the team’s depth chart.

Over the summer, prior to the Rangers signing Hajek to a one -year deal, I noted that his agent Allan Walsh was likely trying to facilitate a trade for the 23 year-old defenseman.

Larry Brooks is reporting that the Rangers did indeed try to move Hajek over the summer. Once at the draft and all the way up to the day of his signing. There were no takers for him.

In reading that, there could be for several reasons for why no one wanted him:

So now the Rangers will need to decide which player they will risk losing to waivers when they finalize their roster from 26 to 23.

Here are the players fighting for a spot with an (E) indicating their waiver exemption status:

Libor Hajek is likely to be claimed off waivers

The Rangers have plenty of cap space to go for a 23 man roster. Which means they can keep Hajek as the 7th defenseman. They then need to determine which of the following three players they want to risk losing on waivers in Hunt, Gauthier, and Tinordi. It’s a dilemma because whomever they chose is likely to be claimed.

Hajek, in his young career has recorded 10 points in 77 NHL games. The Rangers signed him to a one-year deal worth $874,125. It’s also a two-way contract with an AHL salary of $70,000, making him a very enticing waiver claim.

He’s another left shot defenseman that’s had his ups and downs since joining the Rangers. He made his long awaited debut in the 2018-19 season and scored a beautiful goal in his five game stint. Unfortunately, that season was ended abruptly after a shoulder injury.

He struggled the following season and scored five points in 28 games but had a -4 rating. Last year, he looked better defensively in spurts but seemed to lose the offensive side to his game. He managed just 2 goals and 2 assists in 44 contests, but had a +2 rating after being inserted permanently into the lineup in February. Thus far in camp he has been steady, just not better than either Lundkvist or Jones.

While a future with the Rangers seems unlikely, he’s still viewed as an NHLer and will likely find a new home via trade or waivers this season. 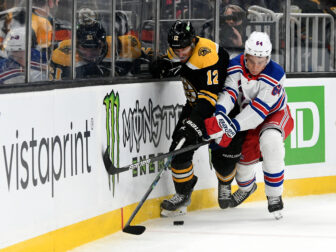