The New York Rangers are showing no signs of slowing down. Quite the contrary, they seem to be speeding up.

Despite an unexpected long layoff after the Islanders were shut down due to COVID issues, the Blueshirts came out with jump against the Flyers. When the team went to center ice to salute the crowd, they moved into a second place tie with Cup favorite Carolina Hurricanes. The team is also just two points behind the division leading Washington Capitals with two games in hand.

Rangers cruise to another home win

Chris Kreider scored again to continue his hot start, Igor Shesterkin made 33 saves and the host New York Rangers continued their roll with a 4-1 victory over the skidding Philadelphia Flyers on Wednesday night.

It wasn’t as easy as the final score would indicate after losing Dryden Hunt to a 5-minute major in the second period and then Barclay Goodrow in the third. Goodrow took a puck to the face and did not return, but was reportedly fine after the game.

“Things were rolling real good then you lose guys, we just couldn’t get our momentum back,” Gerard Gallant said. “In the last five minutes we played real well.”

Kreider scored his 16th goal on the first shift of the third period when he dove for the puck and lifted a wrist shot from the low slot by Philadelphia goaltender Carter Hart. It was Kreider’s ninth goal in his past 12 games, and he joined Edmonton’s Leon Draisaitl and Washington’s Alex Ovechkin as the third player to score more than 15 goals so far.

Artemi Panarin finished it off with an empty-net tally after stripping the puck from Philadelphia’s Claude Giroux with 44 seconds remaining.

Shesterkin became the third goaltender to reach 12 wins and helped the Rangers win four straight games for the third time this season by making 13 saves during three Philadelphia power plays. He heard chants of “Igor, Igor” all night and was named the game’s first star.

“It’s honestly hard to describe,” Shesterkin said. “It adds a lot of emotion, a lot of strength. It motivates me. The most important thing is to try to not cry right then and there.”

On Friday, the surprising San Jose Sharks make their way to MSG followed up by a Saturday matchup against the Chicago Blackhawks.

League wide, the Blueshirts’ 31 points have them tied for fourth overall. However, their .738 points percentage is tied for third in the entire NHL. This is important as the threat of COVID-19 still looms and if games are cancelled again the standings and playoffs will be determined by that stat. 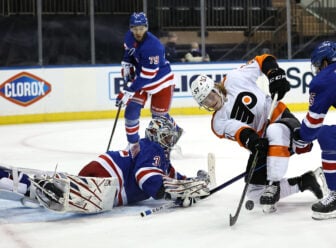 The Rangers are in on DeBrusk and Patrick Roy wants the Montreal job. Read here.