You can expect several teams to be very active this offseason with regards to trade rumors. The New York Rangers are likely at the top of the list along with the Sabres and Kings. These teams are all looking to make changes, but they are not alone. The Flames and Flyers have also openly said they will be active in the summer as well.

The Blueshirts have been in the trade rumors mill for months. It really got going when it was revealed they made an offer for Jack Eichel before the start of this season. James Dolan’s dismissal of both John Davidson and Jeff Gorton sent shockwaves through the NHL. When he mandated Chris Drury make the playoffs, it ramped up trade talk with teams across the NHL.

Later today, I will have a big feature on exactly what that mandate means to the Rangers acquisition strategy. For now, let’s address trade speculation coming out of Edmonton over the weekend. 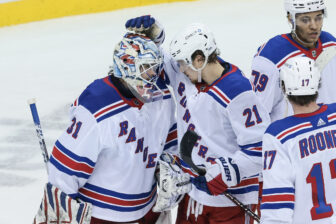 Oilers may target Rangers for trades this offseason

Allan Mitchell at The Athletic thinks the Oilers may target the Rangers as an offseason trade partner. In particular, he has three potential players in mind to address some of Edmonton’s needs.

Starting with Chytil, there’s some thought that he could fit on the left side with Connor McDavid and provide cost control since he’s a RFA without arbitration rights. The potential trade piece on the Oilers side could be right-handed defenseman Ethan Bear. However, Mitchell is not taking into account the Blueshirts overloaded right side that will also include Nils Lundkvist next season and possibly Braden Schneider next season. Adam Fox and Jacob Trouba are both locks on the Rangers right side.

As for Georgiev, there really isn’t any reason to think the Rangers will be trading him and going with Keith Kinkaid as the backup next season. When it comes to Julien Gauthier, he may go unprotected and drafted by the Kraken.

My assessment is the Oilers don’t have what the Rangers are looking for in a trade. New York is looking for a top center to join Mika Zibinajad, which they will be looking elsewhere for.

Check out The Daily Goal Horn every morning for your NHL Playoffs Recaps! Check it out here.