The New York Rangers and Tampa Bay Lightning will square off to open the regular season.

Tonight’s game and broadcast info are below.

Head coach Gerard Gallant met briefly with the press before the contest and responded to a lineup question with a little comedy.

“Who’s not playing tonight?” Gallant said with a smile. “You’ll find out in an hour. You’ve seen the lines– nothing’s changes since yesterday.”

Based on that information, the lineup will be as follows:

Sammy Blais was doubtful coming into tonight after suffering an upper-body injury in the Rangers last preseason game on Saturday. Near the boards in the first period, he took a hard hit from Isles defender Alexandar Romanov and left the game soon after.

No word if he will need to go on IR but that doesn’t seem likely.

Dryden Hunt remains with the team and subbed in on the fourth line during practice.

Vitali Kravtsov getting a big opportunity

Kravtsov, 22, was selected by the New York Rangers in the first round (9th overall) of the 2018 Draft. Last season, he recorded 13 points in 19 KHL games. His tumultuous past with the organization which includes bolting the AHL’s Hartford Wolf Pack twice and requesting a trade is well documented. However, this summer Kravtsov signed a one-year, one-way deal to stay with the Blueshirts vowing to prove his worth.

He will now get a huge opportunity to make his case that he belongs in the lineup and playing decent minutes.

Although he struggled in training camp with just one assist in four games, there’s been a lot of extra work with Artemi Panarin, who has played a mentor role with Kravtsov. Together with Vincent Trocheck, they will form the team’s second line.

Kravtsov also played on the right wall in practice on the team’s second PP unit.

The best news about the lineup is seeing Kaapo Kakko on the top line.

This summer, the 21 year-old from Turku, Finland signed a two-year deal with an AAV of $2.1 million. He’s entering his fourth NHL season and for his career, he’s amassed 58 points in 157 games.

“I’ve been working hard all summer and I’m ready to go,” he said at the end of camp.

In his last two preseason games, all with Mika Zibanejad and Chris Kreider he registered 3 goals.

“He came to training and played great,” Gallant said before the game. “He’s deserved his chance. He shot the puck and was around the net a little bit more. He’s got a great shot. He’s a year older and more confident.” 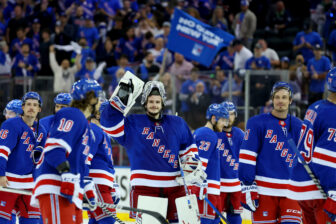 Also Read:
One bold prediction for each New York Rangers player in 2022-23