The New York Rangers need to put last night’s tough loss to the Nashville Predators behind them quickly. Their focus must shift immediately to picking up a much needed home win against the Arizona Coyotes on Sunday.

Madison Square Garden hasn’t been that tough a place to play for opposing teams this season and the Rangers want to change that reality. They are 3-3-3 and have been outscored by a 27-22 margin at home.

The Rangers will also be looking to snap a three-game home losing streak (0-2-1) where they’ve blown consecutive two-goal leads to the Red Wings and Islanders.

“We controlled the play and we just need to keep doing what we’re doing,” Barclay Goodrow said after outshooting the Predators 35-18. “It can get frustrating, but we can’t get down. It’s all about moving on and getting the two points tomorrow night.”

The New York Rangers scored a big win in Detroit by scoring 8 goals to start their two-game road trip on Thursday, but likely wished they would’ve save a few for their 2-1 loss to Nashville on Saturday.

The biggest issue for the Rangers was their inconsistent power play that went 0-5, including a four-minute man advantage late in the third period with a chance to tie.

“It wasn’t as good as it should have been,” Gerard Gallant said. “I mean, that was the difference, obviously. They had some looks, but they didn’t have the premier looks that they usually get. Just a little off, that’s all.”

Igor Shesterkin is expected to get the start in goal against the Coyotes, whom he beat on October 30 by a 3-2 score. Mika Zibanejad broke the tie in the final frame on a power play goal, which the team would like to get back on track as soon as possible.

“We have to keep the trust we have in this room,” captain Jacob Trouba said. “There wasn’t much adversity in the past for us and I think we’re going through a pretty good stretch of it here. We’ll see what this team is made of. You’ve got to keep the faith and keep believing in the game we’re playing.” 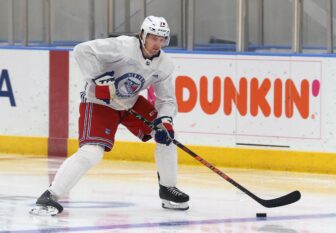 The Coyotes are off to a solid 3-1-0 start to a 14 game road trip due to a locker room annex being constructed at the Mullett Arena. Their temporary home on the campus of Arizona State University has received some positive reactions, but the locker room situation is not up to par.

“This room is a little poo poo. It’s a little cold in here, too. Not gonna lie.” Ryan Reaves said via The Daily Faceoff after playing their last month. “It’s a weird setup.”

Arizona lost to the New Jersey Devils 4-2 on Saturday night and could only muster 18 shots.

Despite the Rangers being the home team, they are the ones who actually travelled before the game. The Yotes have been in the Tri-State area starting on Long Island this past Wednesday beating the Islanders 2-0.