Henrik Lundqvist went from a seventh-round pick out of Sweden in 2000 to a franchise icon for the New York Rangers.

On Friday, he will get his No. 30 raised to the rafters at Madison Square Garden before the Rangers host the high-scoring Minnesota Wild.

The team watching Lundqvist’s jersey getting hung to the rafters is being included in the conversation about championship contenders as the Rangers enter with 60 points in a three-way tie atop the Metropolitan Division with the Carolina Hurricanes and the Pittsburgh Penguins.

New York is 9-4-0 in its past 13 games but is coming off a rare dud in a 5-3 road loss to the Columbus Blue Jackets on Thursday. New York coach Gerard Gallant said he was happy with the performance of just three of his players.

Artemi Panarin and Barclay Goodrow scored in the opening 4:44 to give the Rangers a 2-0 lead. However, New York then allowed four straight goals before Mika Zibanejad scored a power-play goal in a 20-shot third period.

“We didn’t play the way we should have played for 60 minutes, and it cost us two points tonight,” Gallant said.

The Rangers haven’t taken consecutive losses since Dec. 17-29, and they have not gone consecutive games without earning a point since Dec. 12-14. They also are on a five-game home winning streak but may be without standout defenseman Adam Fox, who sustained a minor upper-body injury in the third period Thursday.

Lundqvist made his debut in 2005-06 after the Rangers had missed the postseason in seven straight seasons. He went on to post 459 wins, a .918 save percentage, a 2.43 goals-against average and 64 shutouts while helping turn things around for the team.

The Rangers made the playoffs in 11 of his first 12 seasons, including a run to the 2014 Stanley Cup Final.

“I remember playing in a lot of those games, for Messier, Graves, for a lot of those guys. I was on the ice when they were retiring their numbers. And it was a cool moment to be a part of that, to see them, to experience it and realize how much they meant to this organization,” Lundqvist said in preparation of tonight.

“I don’t know how I’m going to feel. I know my closest friends and my entire family will be here. And that alone will make it very special for me. And then to have all the fans.” 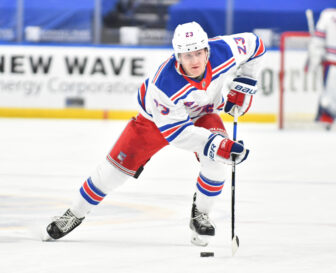 Also Read:
Adam Fox injury not serious; what are the Rangers options

Wild have some old friends of Lundqvist

The Wild have two familiar faces to Lundqvist, Mats Zuccarello and goalie Cam Talbot. Zuccarello debuted with the Rangers in December 2010 and scored 113 goals in 509 regular-season games during nine seasons with New York. Talbot was Lundqvist’s backup during the 2013-14 and 2014-15 seasons.

Zuccarello enters with 12 goals and 38 points for an offense that has tallied 145 goals, the sixth-highest total in the NHL. He scored Monday when the Wild rolled to an 8-2 win over the visiting Montreal Canadiens that gave them six wins in seven games following a five-game skid (0-4-1) from Dec. 11 to Jan. 1.

“It’s huge for him and his family,” Zuccarello said Thursday of Lundqvist’s honor. “It’s going to be cool for me to experience that and be a part of that.”

Talbot, who is 16-8-1 with a 2.96 goals-against average in 25 games this season, missed six games with a lower-body injury before stopping 14 shots Monday. He left after the second period for precautionary reasons but could make the start after enjoying the ceremony for Lundqvist.

“He was the face of that franchise for the better part of 15 years, so there’s no one more deserving to have their number up there than him,” Talbot said of Lundqvist. 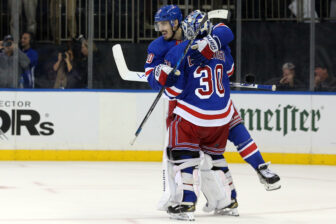