Bartkowski, 34, is a left-handed blue-liner that played for the Wilkes-Barre/Scranton Penguins of the AHL last season. In 72 games, he registered 16 points, 29 penalty minutes, and a +7 rating.

In his career, Bartkowski has amassed 48 points in 256 games with 157 penalty minutes. He was drafted in the 7th round by the Florida Panthers in 2007, but was traded to the Boston Bruins in 2010 before ever suiting up for them.

The Rangers now have two players on PTO for training camp which opens on Wednesday, September 21. Forward Jimmy Vesey was signed to a Professional Tryout earlier this month and he will battle for a spot on the team’s fourth line.

Vesey, 29, registered 8 goals and 15 points in 68 games for the New Jersey Devils last season. According to GM Chris Drury, it was watching him up close that made them interested.

“The things he was able to do really well for Jersey last year excited us,” Drury relayed per USA Today’s Vince Mercogliano. “Bottom six, big guy, physical player, had a really good year on the PK. He’ll get a chance here to show us what he can do.”

As for Bartkowski, this seems a little more surprising of a move based on comments Drury made last week.

“We’re still actively looking at some PTOs for defensemen,” Drury said. “I think we’re pretty comfortable right now with who we have back there.”

Well, maybe not that comfortable.

Perhaps Drury and the rest of the coaches were not pleased with what they say in the Rangers rookies back-to-back losses against the Flyers rookies.

We know both Zac Jones and Matthew Robertson will be competing with Libor Hajek for the third pair left defense job at camp. Maybe the organization wanted to stiffen that competition simply by having another veteran competing for the spot.

Should Bartkowski earn a standard contract, expect it to be for the league minimum.

Even if Bartkowski doesn’t pan out, Drury told reporters that they would be open to using the waiver wire for a defender during the season. 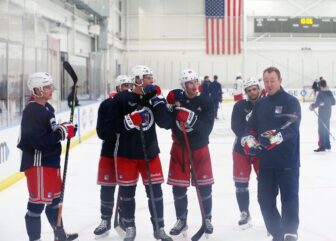