Towards the end of last season and throughout the offseason, the Tom Wilson situation has been a popular topic of discussion. One of management’s main focuses has been to turn the Rangers into a more physical team as a result.

Fans will be watching for a fight on opening night. But, the Wilson incident happened last season. The Rangers can’t let it negatively impact them now.

“The team is beyond that, that’s behind us,” Gerard Gallant said before leaving for DC. “We’re not planning on going over there and saying ‘if you get a chance to run over Tom Wilson – run him over’, that’s not our objective. Our objective is to win the hockey game.”

Tom Wilson incident served as a wake up call

Some good came out of Wilson’s antics. The Rangers started to learn what it meant to stand up for each other. It also sparked offseason moves to increase toughness. The additions of Ryan Reaves, Sammy Blais, and Barclay Goodrow will all help in that area.

Ryan Reaves seems eager to get going with the Rangers. He understands his role as an enforcer and knows exactly what happened with Tom Wilson last season. If he plays, he will be ready to go if there should be a problem on opening night, as many fans seem to believe there will be. While it’s helpful to know that Reaves will willingly put himself in this position, he and the Rangers need to be smart.

“I’m not here because of Tom Wilson. I’m here because of what players like Tom Wilson brings to his team, and Cal Clutterbuck and (Matt) Martin bring to their team,” Reaves declared in camp. “It doesn’t matter what the player is, what team it is, whether we’re out east or out west. I’m holding everybody accountable. It doesn’t matter what happened last year. It matters what happens this season and everyone is going to be held accountable when they go up against our team.”

There is no sense in fighting Wilson on opening night

Though the Wilson situation occurred late last season, the Rangers need to put it behind them like Gallant stated. These players are professionals. If they haven’t already decided that what happened last year can have no baring on this year, they need to immediately. Holding a grudge against Wilson will only create a distraction. The focus needs to be on hockey.

If the Rangers want to start something with Wilson early in the game on Wednesday night just to get it over with, that might be acceptable. This remodeled Rangers team may want to send a message so teams don’t take advantage of them this season. But at the same time, once Wilson and the Capitals retaliate, the Rangers will be looking at a feud that could’ve been avoided. Rivalries are fun until they take away from the actual hockey. That’s the danger here. The best thing for the Rangers to do is to leave the situation alone and not start anything.

From a strategic standpoint, starting an incident through a fight or dirty hit doesn’t make sense. This would only result in a penalty. Penalties based on something that happened last season are a sign of an immature team. With the rebuild over and sights set on the playoffs, that is not how the Rangers want to look. 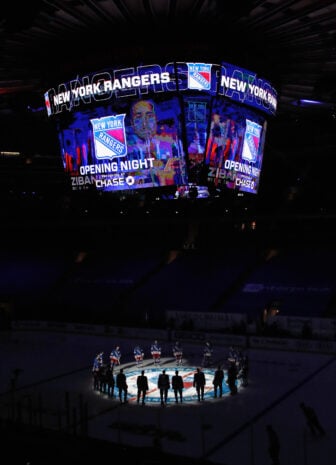 Also Read:
Details on how to watch and stream all New York Rangers games this season

The goal is to make the playoffs this season

As has been repeated by players and management, the main goal this season is to make the playoffs. For this to happen, the Rangers have to stay focused. That has to start on day one. Wilson presents a potential distraction. But the Rangers have the power to not allow that possibility to become a reality.

Chris Kreider demonstrated leadership and physicality against the Devils last week which is huge for the Rangers. This, among other factors, is a great reason to name him captain. However, the Rangers will not be naming a captain at this time. Captain or not, Kreider can use his leadership to keep this team on track. It’s true that they have new elements of physicality, but they also have skill. They need to be smart about using physicality to improve play and stand up for each other. It cannot be used recklessly if they’re looking to make the playoffs. Disciplined teams have success. 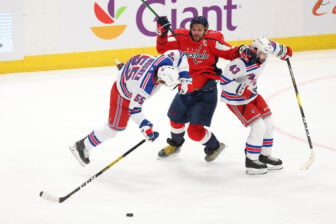 Also Read:
NHL Roundup: Less than 5 player not vaccinated; Backstrom out for Caps; Ovechkin likely; MacKinnon has COVID; and more