New York Rangers must learn lessons despite beating the Panthers

Though the Rangers were able to hand the Florida Panthers their first regulation loss of the season, they clearly need to improve in multiple areas. There are lessons to be learned despite the victory.

The Rangers next play on Saturday against the Columbus Blue Jackets. It will be a good opportunity for them to improve different aspects of their game.

Rangers need scoring from beyond the usual suspects

K’Andre Miller picked up a goal against the Panthers, but the Rangers require scoring from other forwards, not necessarily defensemen. Additionally, team defense could certainly be tighter and the Rangers must maintain momentum late in games.

Chris Kreider currently leads the Rangers in goals with nine followed by Mika Zibanejad with four. Tied for third are Adam Fox, Barclay Goodrow, Alexis Lafrnière, and Kevin Rooney with three each. Who the Rangers really need more production from are Lafrenière, Kaapo Kakko, Ryan Strome, and Artemi Panarin.

Panarin leads the team in assists with 11, so he has certainly picked up his game but could use more from him. Strome picked up his second goal of the season against the Panthers, but has been relatively quiet this season. Hopefully this will start to see a string of points from the team’s second line center.

The larger issue here is the lack of scoring from Lafrenière and Kakko. Lafrenière is tied for third on the team, but his last goal was six games ago. Playing on the wing, whether it’s the right or the left like Monday night, he has to be scoring more consistently. That’s what you’d expect from the #1 overall pick of the NHL Draft in 2020.

Similarly, Kakko, who has been playing on the right, still hasn’t picked up a point this season. He almost tallied a beautiful assist against the Panthers on a Panarin goal that was disallowed. Kakko was looking more comfortable and confident in the first few games of the season, but being injured seems to have significantly set him back.

The most noticeable problem to address is his tendency to take the puck to the outside rather than go down the middle. The Rangers drafted him second overall in 2019 to score goals. It’s time for him to start doing putting the biscuits in the basket. 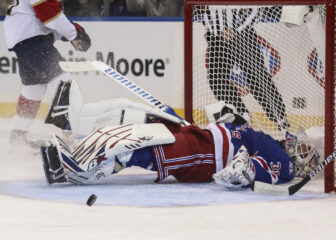 Rangers defense struggled against the Panthers

The Rangers and Panthers were both sloppy in their own zones on Monday night. The game was wide open early on before the Panthers simply just dominated in shots.

With the defensive core the Rangers have, they must be better. Fox and Ryan Lindgren are generally solid but Monday night were often caught out of position. Miller and Jacob Trouba need to use their size more often. They are the ideal pair for using physicality to defend yet seem to scramble in their own end too much. When playing teams with potent offenses, playing defense without physicality is fairly useless.

In the end, the main reason as to why they haven’t been blown out of more games is because of Igor Shesterkin. It’s great that they have the ability to skate and use speed, but they also need to be adaptable in games that might not be so wide open. This is something they will have to work on as they continue to mature as a group.

Rangers must improve on situational hockey

As Sam Rosen and Joe Micheletti were talking about on Monday night’s broadcast, situational hockey is something the Rangers have to address. They’ve already blown too many leads this season, the most notable coming against the Edmonton Oilers. This was almost the case again against Florida.

The team needs to have a better understanding of how to protect a lead late in a game. They can’t be taking unnecessary risks with a lead late in the third period. A specific observation against Florida was that the Rangers were executing too many back passes. This is a risk because the Panthers were putting on the pressure. Any opponent still down late in the game is going to be applying pressure and trying to pin the winning team in their own end. The Rangers can’t make this so easy for opponents. Just moving the puck ahead and making your opponent go 200 feet to beat you is the way to play with a lead.

Further, the Rangers have an issue with maintaining momentum. This was a problem under David Quinn and appears not to have been solved with the coaching change. They can’t sit back so much with a lead late in the game. It gives their opponent the opportunity to pin them in their own end. Obviously, they want to play cautious hockey late, but that doesn’t mean they should stop applying pressure altogether.

Overall, some of the Rangers’ main problems were highlighted in Monday’s game against the Panthers despite the win. As this group continues to play together and find their way, they should view this game as a learning opportunity. 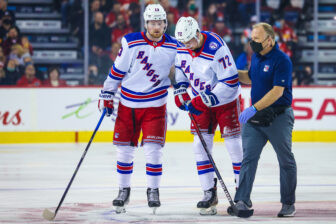