Should the New York Rangers name a captain before the playoffs?

The rumblings are growing once again regarding the New York Rangers and if they should name a captain before the playoffs start next week.

Over the last few days, Chris Kreider has been nominated for the Bill Masterton Trophy and won the coveted Steven McDonald Extra Effort Award. He was also the first recipient of the Rod Gilbert ‘Mr. Ranger’ Award on Wednesday night.

Come Friday, when the Rangers close out the season against the Washington Capitals, he could also win the Players’ Player Award and Team MVP.

While Igor Shesterkin is probably a lock to take home the Team MVP as voted by the local media, Kreider seems to be the logical choice for Players’ Player. It’s another internal award, but this one is voted on by the players and given to the teammate that best exemplifies what it is to be a team player.

If Kreider wins it as I expect, the calls to name him captain will become even louder.

Should the New York Rangers name a captain?

Honestly, this can be debated until everyone is blue in the face.

The New York Rangers made a run to the Stanley Cup Final in 2014 without one. Brad Richards, who was one of the alternates acted as the de facto captain after Ryan Callahan was traded for Martin St. Louis.

So if you are proponent for naming a captain, there’s a solid argument of trying to win the Cup without one being nearly impossible.

That being said, if the Edmonton Oilers decided not to name a captain during their dynasty I’m pretty sure they still would’ve won.

Why Gerard Gallant opted not to name a captain

The New York Rangers announced before the start of the season they would go with six alternates. After an entire summer of talking about naming a captain, the decision was made that the timing wasn’t right to name one.

This was a big surprise, especially after what Gerard Gallant said at the start of training camp. “I don’t know for sure what’s going to happen, but if I was a betting man, I think we will have a captain on day one.”

So why did Gerard Gallant decide not to name a captain?

“We’re going the route I took before in my past experience (Vegas), where we had six alternates” Gallant gave as his reason. “Me, and [GM Chris Drury], and the coaches had a lot of discussions over the last three weeks but this is the direction I feel the most comfortable with.”

So Artemi Panarin, Chris Kreider, Mika Zibanejad, Jacob Trouba, Ryan Strome and Barclay Goodrow all have the A sewn on to their chest.

“There was discussions about having a captain, there was a lot of discussions about what I’ve had in the past,” he said. “When Dru told me that ‘ultimately you’re going to make the final decision on this’, that’s what I came up with. That’s what I feel very comfortable with our group. The six guys are all legitimate captains. Being with them only a month, this is the best direction.”

Has Gallant seen enough to name a captain?

After being with the team now for an entire season, Gerard Gallant should have enough information to name a captain.

When you look at all six alternates Chris Kreider, Jacob Trouba, and Mika Zibanejad are all legit candidates. There were preseason rumors that Trouba was close to being named the captain and he still would be worthy of the honor, but Kreider has certainly done enough and more to be given the C.

So will Gallant name a captain? If I had to guess, I’d likely say no.

Why mess with the formula of success you’ve had all year? If the time comes to be called up by Gary Bettman to accept the Stanley this summer, the Rangers can provide a name to come to the stand and give Bettman a handshake.

At the end of the day, nothing I say or write is going to change peoples’ opinions. But if I had a vote, I’d name Kreider the Captain tomorrow night when he accepts the Players’ Player Award. 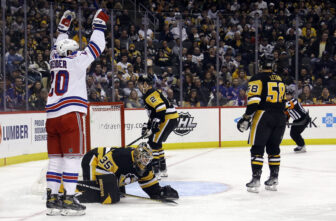 Also Read:
Rangers first round opponent to be decided on last day of season