An overtime loss to the San Jose Sharks has magnified defensive issues the New York Rangers must correct as soon as possible.

Things have gone relatively well for theRangers early on in this new season. A 3-1-1 start, an excellent power play, and the clutch goaltending of Igor Shesterkin would lead many to believe they’re on their way to another trip to the playoffs.

Unfortunately, a closer look under the hood at the team’s engine says there’s work to be done.

Defenseman Adam Fox said it best earlier in the week, “wins mask all mistakes” and the masks were ripped off in the loss to San Jose on Thursday night.

Head coach Gerard Gallant has called out the defensive struggles starting with the team’s third period letdown in a win against the Anaheim Ducks on Monday.

“I thought we got lackadaisical with the two goals in the third period,” Gallant explained. “That’s frustrating. We have to finish games better than that. We don’t need to give up those goals with careless plays in the neutral zone.”

He’s also made it a point to stress that this isn’t just on the six guys who play defense, but the entire team defensively.

The situation reached new heights when the team played one of their worse periods since Gallant took the job. The team was outshot 16-2 in the third against San Jose and if not for Shesterkin standing on his head, the game would have been decided in regulation.

Things only got worse in the overtime session as it perfectly summed up their poor performance. They could not get out of their own way during the 3-on-3 period. The harder the Sharks came at them, the more running around the Blueshirts did until Erik Karlsson won the game just 49 seconds in.

“I was pretty happy with the first two periods,” a flabbergasted Gallant began. “We were in good shape, we played well, but that third period, I have no idea where that came from. I have no idea what went wrong. It was just a total collapse. It was embarrassing, actually.”

The Rangers have scored 19 goals in their five games this season to date, which is ranked fourth in the NHL. That number is buoyed by 5 power play goals, but last night’s loss to an aggressive Sharks PK proves they’ can’t rely on it all the time.

New York finished 0-5 on the man advantage on Thursday and it was just the second time they were held scoreless. The other was against the Winnipeg Jets in a 4-1 loss. So in two games with a power play goal they’re 0-1-1.

Basically, the potential for an offensive explosion is ever present. But the team first has to stop playing sloppy hockey and find their game at the level it was played late last season.

Too many mental mistakes, turnovers, a defense that needs for all 5 guys to be better as a unit is a reason to be concerned.

“We’re trying to create too much with defense jumping in when we don’t need to,” captain Jacob Trouba said. “It’s not an offensive free-for-all, it’s a hockey game. We’ve got to play defense too.”

The Rangers will be back at practice on Saturday with their next game against the Columbus Blue Jackets set for 5 PM ET on Sunday at Madison Square Garden. That gives them time to get things corrected.

“We’re going to talk about this one when we get back to work on Saturday,” Gallant stated after the loss. “I don’t expect to see that kind of period again.” 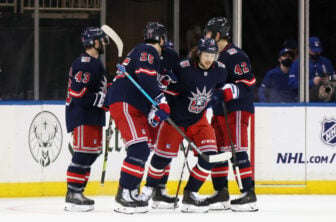