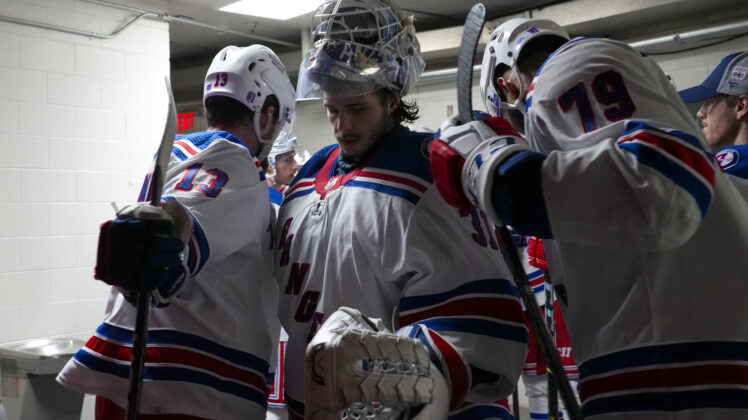 May 18, 2022; Raleigh, North Carolina, USA; New York Rangers goaltender Igor Shesterkin (31) comes out of the locker room against the Carolina Hurricanes before the start of the second period in game one of the second round of the 2022 Stanley Cup Playoffs at PNC Arena. Mandatory Credit: James Guillory-USA TODAY Sports

The New York Rangers need to make a statement in Game 2 tonight against the Carolina Hurricanes.

In dropping Game 1 as they did, it nullified all the talk about the Rangers being the better team for two periods. I mean, that’s what Canes coach Rod Brind’Amour said they were before his team dominated the third period to tie it and then win it in OT.

While the Blueshirts were actually the better team for two periods, they failed to build on a very shaky 1 goal lead. Their top two lines looked afraid to venture too deep in the Canes zone for fear of getting caught up ice.

The Rangers seemed very content with lobbing pucks out of their zone and forsaking any offense to avoid the Canes aggressive forecheck. That is simply not something they can do again if they want to even the series before heading to Madison Square Garden for Game 3 on Sunday.

Rangers need to send the Hurricanes a message

Including the sweep in the Qualifying Round in 2020, the Hurricanes are 7-1 against the Blueshirts in their last 8 games.

“We obviously raised the level of intensity in our game. We played with a little more desperation, which we needed,” Brind’Amour said. “We were lacking a little of that for two periods. It doesn’t always work out, but we had a real good third period and that got us back in the game. Then it carried into overtime.”

Wouldn’t it be great if the Rangers could give the Canes a brisk slap and knock some of that cockiness they have over them out?

It’s high time for the Rangers to come at Carolina with everything they’ve got and walk away with a convincing win.

“Being even-keel is one of the most important things in terms of not getting too high or too low,” Andrew Copp said. “There’s no panic. We just have to come out a play kind of the same way and drive a little more play in the third making them defend instead of trying to protect a one goal lead.”

The Rangers did indeed fall into a defensive shell that eventually failed to stopped the final period push by Carolina. When Sebastian Aho snuck in past the Rangers defense and got two shots off untouched to tie the game late, you could sense what was coming next.

Ian Cole’s harmless shot from the slot was heading right towards Igor Shesterkin’s raised blocker when Ryan Lindgren inexplicably raised his stick towards the shot only to deflect it by his own goalie.

“It was a tough loss. We have to get by it which we did,” Gerard Gallant said. “I liked the way we played for two periods. Probably our best hockey of the year in my opinion. If we can play that game again tomorrow I think we’ll win.”

The Blueshirts are no strangers to being down in a series and to a man seem very comfortable despite losing Game 1 as they did.

“We’ve been in this position,” Filip Chytil said. “I think we can take a lot of positives from [Wednesday]. I think (for) two-and-a-half periods we play (how) we want to play and we dictated the tempo of the game. We have to build on this game and take all the positives to another game.”

The Rangers are facing a stiff challenge as the Hurricanes have won every game they’ve played on home ice in the playoffs. Furthermore, Carolina has outscored the opposition by a 20-7 margin.

That doesn’t seem to have coach Gallant too worried.

“We were disappointed but in a lot guys’ heads the last two times here we got dominated but after [Game 1] it was a different feeling,” he said. “I think our group feels real good about our team.”

Hopefully that good feeling translates into a statement win by the Rangers and knocks Brind’Amour and the Canes off their high horse. 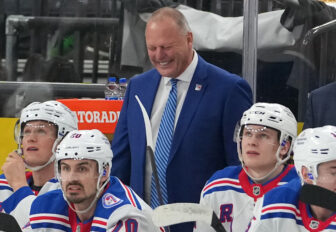 The Tampa Bay Lightning are making a strong case for a three-peat with a late win over the Florida Panthers. Plus the St. Louis Blues hand the Colorado Avalanche their first postseason loss. Read more.