The New York Rangers are down 2-0 in their best-of-seven series against the Carolina Hurricanes. It’s not the position they want to be in, but once again they are being stoic in the face of adversity.

“We’re in a hole. We’re going to go home and work our way out of it,” Jacob Trouba said. “Nothing has really rattled this team. Keep your head down and play that next game. We’ve been down in games and down in series before. We keep grinding our way out and that’s what we’re going to do.”

Well, I for one was pretty rattled when former Rangers defenseman Brendan Smith scored a shorthanded goal in the second period which was all Carolina needed.

Where, Oh Where is the New York Rangers offense?

“I didn’t feel like I needed to do that many huge saves,” said Raanta. “Our guys were making sure there were no back-door plays or easy shots.”

Raanta is right, because the Rangers offense all but went missing after the first period. A first period that saw the Rangers get several power plays including a 4-3 advantage.

During that PP, ESPN used a behind-the-net camera angle which highlighted the Rangers stubbornness to just put a puck on goal. There were several times that either Adam Fox, Mika Zibanejad, or Artemi Panarin could simply put the puck on net with Chris Kreider near the crease for a loose puck.

Instead, they continue to be pig-headed making cross-ice passes to try and score into an empty net.

“I’m seeing a great penalty kill put a lot of pressure on them,” Gerard Gallant said. “We didn’t find the inside man very often in the slot, the bumper guy. They put on a lot of pressure, and we just didn’t adjust to it quick enough. We’ve got to compete a little harder, I think.”

Kreider and Panarin, despite the power plays were each held without a shot on goal Friday. Kreider posted a career-high 52 goals during the regular season and not having a shot on goal almost seems criminal.

At this time, Rangerstown is either falling into a glass half full or half empty camp.

You can most assuredly put me in the half empty faction simply because it’s hard to see the Rangers find a way to beat the a Hurricanes team 4 out of the next 5 games.

Head coach Gerard Gallant, who is up for the Jack Adams Award is remaining positive as he has all year.

“You get your team prepared to play, you play as hard as you can and you hope you win these hockey games,” he said. “I’m happy with the way we performed overall. I wish we would have got one of these two games, we probably could have. That’s the way it goes. Play well, play hard, we’ll find a way to get another win.”

The scene now shifts to Madison Square Garden for Game 3 on Sunday at 3:30 PM. The Carolina Hurricanes have yet to win a game on the road in the playoffs. 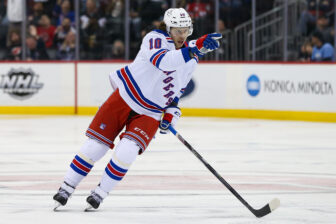 Also Read:
Rangers Roundup: Artemi Panarin would love to do ‘stupid s–t’ at the blue-line, and more