The New York Rangers sent a message to the Carolina Hurricanes with a dominant performance in Game 4.

It all started with Jacob Trouba coming cross ice to make a big hit on Max Domi early in the first period. Undoubtedly a little payback for taking a cheap shot on Ryan Lindgren at the end of Game 3.

That led to Steven Lorentz jumping in to fight Trouba, who received an instigator penalty. Frank Vatrano would score on the ensuing power play. From there the Rangers never looked back with their best game of the entire playoffs.

“We got a lot more pucks to the net. We were playing north and direct,” Andrew Copp said on ESPN. “That’s the recipe against these guys. The better we breakout on the forecheck, the better off we’ll be.”

Igor Shesterkin was not called upon as often in Game 4 but when needed he was stellar. Two saves stand out in this game that required him to make stops going across the crease. The fist was off a Brett Pesce one-timer and the other a stretching pad save at the top of the crease on Teuvo Teravainen.

The Rangers really took over the game when Trouba made a huge hit on Domi that led to an instigator penalty that Frank Vatrano scored on.

“That was a big hit by Troubs– good clean hard hit,” Gerard Gallant said. “[Carolina] took an instigator penalty and we capitalized, so it was big for us.”

The Rangers made it 2-0 when Andrew Copp stopped a Vincent Trocheck clear and fed Ryan Lindgren at the left circle. His blast was deflected by Adam Fox in front.

“I thought we didn’t sit back as much as we did in the other game when we got the lead,” Fox said on MSG. “It was a good shot by Lindy and it was probably going in so I may have stole one.”

In the second period, Mika Zibanejad led an odd-man rush. Lindgren coming in late screamed for the puck and Mika dumped it off. Lindgren laced into the shot which Raanta stopped but could not control. Zibanejad swooped in to clean up the garbage for the 3-0 lead.

The Hurricanes ended Shesterkin shutout bid on a goal by Teravainen in the third period.

However, Copp ended any idea of a Hurricanes comeback with a gorgeous goal in the slot with 8:50 remaining.

At the end of the game, Carolina put Max Domi out there and Ryan Reaves was in his face until the buzzer. Things remained relatively calm as he wanted no piece of Reaves.

“We competed hard,” Gallant said. “We go into this series and know we’re playing a real good team. We feel good about ourselves but there is no momentum carry over to the next game.”

Game 5 is Thursday night in Carolina. 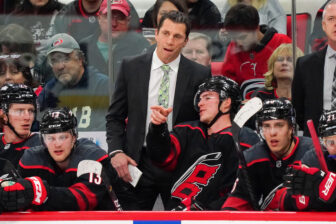 The Florida Panthers were eliminated so what’s next for UFA Claude Giroux? Plus will John Tortorella end up behind the Flyers bench? Read more.