The New York Rangers completed another four game road trip going 1-1-2 for four points. On the surface, it appears like another solid trip. Although blowing multi-goal leads and then getting lambasted to close out the set raises concerns.

A hideous three games in Canada has brought out a troubling view of the problems that hinder the progress of the Blueshirts.

The Rangers 6-3-3 record is deceiving. 15 points in the team’s first 12 games would seem to be pretty good, but some of those wins mask poor stretches of hockey. In the case of the Blueshirts, the past three games in Canada may have displayed how far away this team is from having sustained success.

The Rangers have lost their last three games by a combined 15-7. Two of the losses came in overtime versus Vancouver and Edmonton, where the team blew two-goal leads in the third period of each game. The third loss came in a blowout 6-0 defeat, where the team left Igor Shesterkin looking like a shooter tutor in goal against the Flames.

All three games had some similarities that should cause concern:

The Adam Fox and Ryan Lindgren duo is by far the number one paring. Jacob Trouba and K’Andre Miller look okay at times, but then seemed to be running around the ice making mistakes. During this three game losing streak Trouba was a -4 and Miller a -5. Neither defenseman recorded a point during the past three games.

The third pairing of Patrik Nemeth and Nils Lundkvist/ Jarred Tinordi has not played well at all. Lundkvist may need some time in the AHL to fine tune his skills, but the same could be said for Nemeth and Tinordi. 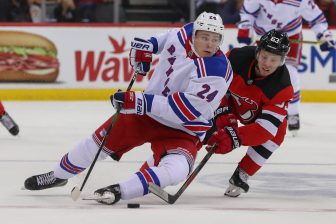 What should the Rangers do now?

Head coach Gerard Gallant needs to change things up. Aside from a few tweaks, he has been fairly patient with the line combinations. The power play looks better thanks to the first unit clicking, but the second seems aimless.

The line combinations and defense units need to be altered, starting with a recall of Zac Jones. Here’s a suggestion:

In goal, Igor Shesterkin cannot play every game. He needs a quality backup to play 15-18 games and Georgiev has not looked good this season.

Georgiev can not be sent to the AHL without passing through waivers, the club will have to consider a trade if he is going to continue his erratic play. Recalling Keith Kinkaid looks like a good option. He played well in the backup spot when called to do so last season and is playing well in Hartford.

At times in a season a coach needs to sit back and watch what develops on the ice. Other times he may need to make a few changes. There’s also times when he needs to reevaluate the lines and roster. Gallant is facing such a time now.

They have shown glimpses of good hockey, but the problems have started to outweigh Shesterkin’s game stealing abilities.

The club needs to get a jump on the problems at hand before they get worse.

Losing several games in a row can be a caution flag that requires attention and the Rangers are there now. 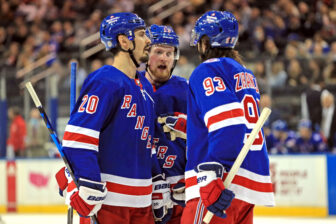 Who are the top trade candidates? What does Torts want to do? And former Rangers in the Blackhawks front office? Read about it here.