The New York Rangers and Philadelphia Flyers rookies will battle once again to start the preseason festivities.

The best young players and future stars of the Philadelphia Flyers and New York Rangers are coming to the Lehigh Valley in September! This exciting weekend series will be a great way for fans to kick off the hockey season as they experience the future stars of both of these teams.

Forwards Brennan Othmann and Will Cuylle along with goalie Dylan Garand were the most high profile prospects in attendance. Additionally, all six draft selections from 2022 were there including Adam Sykora (Second Round – 63rd overall) and Bryce McConnell-Barker (Third Round – 97th overall).

Other notable prospects in attendance were center Ryder Korczak, Brett Berard, and Adam Edstrom. With the Rangers obvious lack of center prospects, Korczak is considered one of their best. As for Berard and Edstrom, both are energy guys that can play forechecking roles on the bottom six sooner rather than later.

Many of the prospects that attended development camp are expected to be at rookie camp.

For the Rangers, one line stood head and shoulders above the rest. It features Morgan Barron at center with Will Cuylle and Lauri Pajuniemi on his wings. Barron has since been traded to the Winnipeg Jets in order to rent Andrew Copp for last season’s playoffs.

On defense, both Zac Jones and Nils Lundkvist were standouts. They used the rookie camp all the way into training camp. Lundkvist won the 6th d-man job to start the season before being sent down in December. Jones eventually worked his way back up and played in 12 games.

The Flyers rookies jumped out to a 3-0 lead after one period on the strength of two power play goals.

In the second period it was Morgan Barron that got the Rangers rookies on the board first. That was followed by a Lauri Pajuniemi tip that was disallowed for offside. Patrick Khoderenko would get the second goal for the Rangers which was then followed by Pajuniemi’s game-tying snipe off a Will Cuylle feed.

The period ended with another Flyers PP goal which gave them the lead at 4-3.

Philly would open the scoring in the third and finish it with an empty net goal for a 6-3 win.

In the end, there were just too many penalties by the Rangers rookies. The Flyers scored 3 PP goals in the contest which was too much to overcome.

The Flyers once again jumped out early thanks to their power play. It was 2-0 and could’ve been worse, but goalie Talyn Boyko stood tall in net. New York selected the 6-8′ netminder in the 4th round of the 2021 draft.

In the second period, the Rangers went to work on the man advantage and were led by the brilliant play of Zac Jones. He looked excellent as the QB and picked up two primary assists as Will Cuylle scored twice.

The first Cuylle tally looked like a quick rebound in front.

Cuylle’s second was a PP tip in front.

The third period was knotted at 2 when prized prospect Nils Lundkvist finally broke through. The winner of the Salming Trophy winner for best Swedish born defenseman came streaking in from the right side to give the Blueshirts a 3-2 lead. It was a night and day difference from Nils compared to the first game.

It ended up being the game-winner as 2020 draft pick, Dylan Garand was outstanding in relief of Boyko. 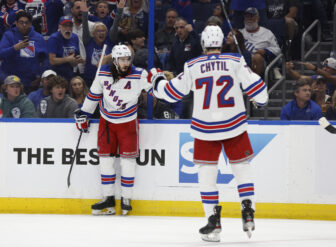