Let’s start this article with the following statement; Nils Lundkvist is doing just fine. Could he be doing better? Yes, but he is still learning to play the NHL game which is faster and more physical than the SHL. The biggest issue for the 21 year-old is adjusting to the smaller ice surface.

He will get there, but wouldn’t it be great if Nils played a few weeks with the AHL Wolf Pack? The Rangers 1st round pick (28th overall) in the 2018 Draft could get over 20 minutes a game and play all situations. Instead, he’s averaging 14:41sheltered minutes, has no points and -1 rating in 5 NHL games.

Nils Lundkvist learning on the fly

“Everything happens so fast here,” Lundkvist admitted during the road trip. “Mistakes lead to scoring chances here. So it’s the small details I need to work on.”

Those small details have led to a lot of issues when Lundkvist is on the ice. His 5v5 CorsiFor is at 40.9%, while his partner Patrik Nemeth is also struggling at 37.6%. The Rangers are also sheltering the rookie by limiting his defensive zone starts to 46.7%.

As for his 14:41 TOI average, 1:53 of it is associated to the PP. There’s another and much bigger issue for Lundkvist, who has only gotten 11.8% of his shots through. He ranks the lowest in that category for any Ranger having played 3 games or more.

Lundkvist is touted as an offensive blue liner that can QB the man advantage, this is something he needs to fix.

“The ice is smaller so you don’t have to skate as much, but you’re meeting more skilled and faster players,” he said. “I’m trying to play smart and go from there.” 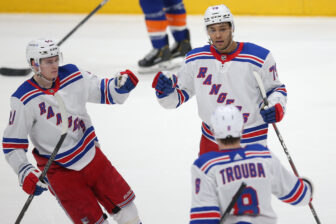 Why the Rangers won’t send him down

In truth, I don’t think the Rangers would have a problem sending Lundkvist down. What I can see the issue being is this; the most likely call up would be Zac Jones. If he were to continue to excel as expected, how in the world could you justify sending him down again?

It’s a Catch-22 for the Blueshirts. You send Lundkvist to Hartford to accelerate his development, but you replace him with another top prospect in Jones, who could take his spot. For what it’s worth, Jones has just 1 assist with a -3 rating in 5 games with the Pack. He’s not a given to be the call up, but he was solid in a 10 game stint last season picking up 4 assists. Jones also had an excellent training camp.

Another reason the Rangers won’t send Lundkvist down is because it took him so long to get here. He’s physically and mentally mature enough to stay with the big club.

What the Rangers need to do is start getting Nils a few more minutes 5v5. They also need to work with him on getting his shots off quicker to the net. He’s definitely coachable, and has the right attitude to get it done.

“It’s a dream come true,” Lundkvist said. “Getting to trust myself a bit more. I hope it’s going to be better.”

Tarasenko or Kessel: Who gets moved first? Read more here.