The clock is ticking to the opening bell of free agency tomorrow at 12 PM ET. As a majority of teams around the NHL are making noise, the New York Rangers are suspiciously quiet.

Chris Drury obviously keeps his cards very close to the vest. But you know he’s in the market to improve his team. Although there are some rumors floating about the Rangers, it seems like whatever info is out there is scarce and limited.

Tampa’s GM shot out a text to all GM’s that he was not bringing back several players and to call him if any team wanted to acquire their rights. Drury immediately jumped at that opportunity and traded for Barclay Goodrow. Once the expansion draft passed, he was signed for 6 years at $3.6 million.

Then Drury shook things up by trading Pavel Buchnevich who was looking for a long-term deal. The Rangers top right wing just signed a 4 year deal with the Blues with an AAV of $5.8 million. That certainly was money Drury had, so what does he intend to spend it on?

The cap situation improved further when he bought out Tony DeAngelo who is rumored to be signing with the Hurricanes tomorrow. New York currently has $21.875 million in cap space to work with to sign RFA’s Igor Shesterkin, Libor Hajek, and Filip Chytil to new deals.

Once the Patrik Nemeth deal is made official tomorrow, he should still have $19M to play with. That is still plenty left over for a blockbuster trade or UFA signing.

What could be up Drury’s sleeve

In all the flurry of activity today, there’s been next to no news on Jack Eichel. I mean zilch.

We’ve had the Golden Knights trade Marc-Andre Fleury to the Blackhawks. With Fleury possibly opting to retire now. Later in the day, Alex Ovechkin signed with the Capitals to the tune of $9.5M AAV. Then news came out of Philadelphia that Keith Yandle will sign with the Flyers for one year tomorrow.

Like I said, a lot of news and nothing on Jack Eichel.

And for those that believe Vegas moved out Fleury’s $7M AAV to take a run at him, you’d be wrong. Word out tonight is they are targeting Phillip Danault from Montreal.

So yes, the pressure is probably on the Sabres now to make a move. Once free agency rings and teams spend money elsewhere, it will remove them from the Eichel equation. Buffalo GM Kevyn Adams may have held onto to his cards too long, because the less demand, the more the price has to come down.

Are the Rangers still in? The last I heard, it was an absolute yes.

Still, Chris Drury could be eyeing Evgeny Kuznetsov in Washington and his $7.8M cap hit. Is there something else? Maybe a one-for-one trade for Jonathan Marchessault out of Vegas for Ryan Strome? What other centers could be available that we just don’t know of yet?

Bottom line, things are way too quiet around Rangerstown. That could all change at any minute. 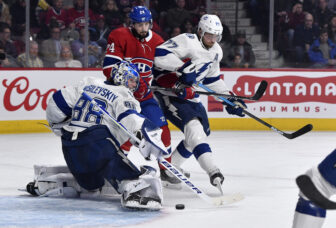 The top free agents updated with all the latest signings and rumors. Read here.