The high-flying New York Rangers will take on the Winnipeg Jets, who are hoping they don’t get steamrolled like the Minnesota Wild did in their home-opener on Thursday.

Last night, the Blueshirts improved to 2-0-0 (their best start since 2019-20) thanks to a monster night by Artemi Panarin. New York’s leading scorer since he arrived in 2019, registered 4 points (1G – 3A) and now has 5 points in the season’s early going.

“We just try to play hard and 100 percent every game, and how things go, things go,” Panarin said.

He wasn’t the only one to enjoy a big night in the 7-3 romp, as Chris Kreider scored twice with Kaapo Kakko, Filip Chytil, AdamFox, and Vincent Trocheck all recording their firsts of the year.

“That’s what we see with our lineup,” coach Gerard Gallant said. “There’s a lot of skill and talent there. As long as we work hard, we’ll get scoring from all over the place.”

New York Rangers look to keep it going in Winnipeg

Last season the Rangers were 25-14-2 for 52 points on the road which ranked them tied for first in the NHL.

Tonight’s lineup could see some changes since it’s the second contest of a back-to-back set.

New backup Jaroslav Halak is expected to make his Rangers debut against Winnipeg after Igor Shesterkin made 33 saves versus the Wild for his second win of the season.

“[Blais] is closer (to returning),” Gallant updated. “We’ll see how he gets along today, but he’s possible for tomorrow (against the Jets).”

One of the most promising signs to come out last night’s win over the Wild was the play of the second line.

“That line was real good tonight,” Gallant said. “[Lafrenière] will adjust to [RW]. They made some great plays.”

Artemi Panarin led the line tallying a goal and three assists. Vincent Trocheck notched a goal and an assist with Alexis Lafrenière picking up two assists.

It was the 21-year-old Lafreniere’s first multi-assist game in the NHL.

“I obviously play with two really good players,” Lafreniere explained. “So try to get open when they have the puck and I try to find them when I have it. Simple.” 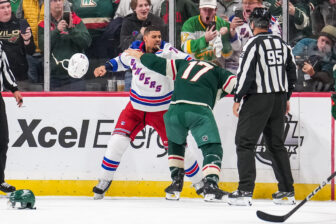 Jets look to take off vs Rangers

The Jets, eager to put a disappointing 2021-22 season behind them, are one of the last teams to begin their season.

In July, the Jets hired Rick Bowness, who began his coaching career in the Jets minor league system and later served as assistant with the Jets. He finished the 1988-89 season after Dan Maloney was fired and went 8-17-3. Now — after stints with the Ottawa Senators, New York Islanders, Phoenix Coyotes and Dallas Stars — he is back.

So far Bowness has preached aggression and accountability, and his moves have included stripping 36-year-old Blake Wheeler of his captaincy. The Jets went 4-1-1 in the preseason.

“When you miss the playoffs, you’re anxious to get back on the ice,” Bowness said. “So, we had that working to our advantage; everyone was ready to go in camp. The attitudes, the work habits, the coming to the rink ready to work has been outstanding since Day 1.”

The Winnipeg cupboard was not bare. Bowness inherited a team that includes Connor Hellebuyck, a Vezina-winning goaltender, and 47-goal scorer Kyle Connor. Nikolaj Ehlers produced 55 points (28 goals, 27 assists) in 62 games a year ago and Mark Scheifele averaged at least a point a game (70 points in 67 games) for the sixth straight season.

Now the Jets welcome a Rangers team playing the second of back-to-backs.

“You can look at it both ways: They could come in (Friday) and be tired since it’s the second game in two nights or they could be more into it,” Winnipeg’s Pierre-Luc Dubois said. “The only thing we can do is concentrate on ourselves and how we’re going to be ready for the game.”