New York Rangers: ‘We are as good a team as anybody in the league’

The New York Rangers aren’t looking back to their bubble games against the Carolina Hurricanes in 2020. After being swept in the Qualifying Round, a not ready for primetime squad bought themselves one more season to show management something.

New York followed that year up with an average season for a young group but owner James Dolan saw enough. After a game against the Washington Capitals that saw Artemi Panarin ragdolled by Tom Wilson, he cleaned house and promoted Chris Drury to take over as President and GM.

His next move was to bring in coach Gerard Gallant and add experience and toughness with the like of Ryan Reaves and Barclay Goodrow. He followed that up with key deadline acquisitions Frank Vatrano, Andrew Copp, Tyler Motte, and Justin Braun.

That still was not enough to overtake the Hurricanes for first place or do much against them in the regular season.

New York Rangers not looking at the past

The New York Rangers are not concerned with their record against the Carolina Hurricanes during this regular season (1-3) or when the two teams played in the “Bubble” in 2020. The Hurricanes swept the Rangers in that unusual series though many felt it was not a real “playoff environment”. For head coach Gerrard Gallant and his Blueshirts, it’s a new season, one in which he is very confident.

Gallant was not coaching during the bubble era, he was dismissed as the Vegas Golden Knights coach in January of 2020. He knows how the Rangers performed, but in reality, he doesn’t acknowledge the series that took place in regards to the next series which begins in Raleigh, NC on Wednesday.

“They didn’t do too well, I don’t think,” he said. “That means not a thing. We played them four times this year, you know what, they outplayed us at least three of those games, for sure. That means nothing to me right now. We’re a confident team right now, we feel good about our team. We just beat a hell of a good Pittsburgh team, I know they had some injuries, but we beat a hell of a good team and we found ways to win in battles. That’s all that matters going forward.”

The Rangers were 1-3 against Carolina, but more importantly, they battled for first place in the Metropolitan Division up until the last week of the season. Something the head coach thinks will help them now in a different environment with an opportunity to play for the Eastern Conference Championship.

“I don’t think they look at our team and say, ‘Well, this is going to be an easy series,’ ” Gallant said. “I think when we’re ready to play, we’re as good a team as anybody in this league and we’ve proven that. We’re never going to quit, we’re going to battle hard and I think it’s going to be a hell of a series.”

The Rangers will have their work cut out for them but with the resiliency they’ve shown this season it will be hard to count them out.

“It’s a huge win for the team and the organization,” Jacob Trouba said after beating the Penguins in 7. “That whole No Quit New York thing is pretty true.”

Gallant made another thing clear on Monday:

“They’re a very aggressive team. They play north hockey and put pucks to the net,” Gallant said. “We have to counter that when they make mistakes and challenge them with odd-man rushes. We know what they’re going to bring and they know what we’re going to bring… We are as good a team as anybody in the league… I think it’s going to be a hell of a series.” 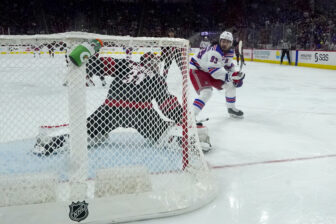 Today’s NHL Rumors looks at two recently eliminated teams and some pending fallout. The Pittsburgh Penguins may have witnessed the end of an era when the Rangers came back from a 3-1 deficit to eliminate them in these Stanley Cup playoffs. Plus Bruins’ Patrice Bergeron says Boston or bust. Read More.