The New York Rangers clinched their playoff spot with a 5-1 win over the Ottawa Senators last Saturday. There has been debate throughout the season as to whether or not they’re ready. Recent games against the Carolina Hurricanes and Philadelphia Flyers along with previous trends offer some answers.

Rangers show experience and knowing how to win

One storyline for the Rangers this season has been that they find ways to win games. They have had success coming from behind in games and maintaining a desire to win. Good teams win games they should lose, and the Rangers have done that multiple times this season. However, the playoffs present a new challenge. The Rangers will have to learn how to win in the playoffs as they have in the regular season.

The game against the Hurricanes initially felt like a playoff game. Both teams played the first period at a high pace. But in the second period, the differences between the teams was revealed. The Hurricanes have had playoff success in recent years having won three rounds in the last three years, including a trip to the Eastern Conference Final in 2018-19. Head Coach Rod Brind’Amour has played a huge role in that process for his team, bringing valuable knowledge and experience to his job.

Rangers Head Coach Gerard Gallant has experience coaching in the playoffs. He took the Vegas Golden Knights to the Stanley Cup Final in their inaugural season. He knows how to win, and now he will need to use this experience to help the Rangers navigate the playoffs.

The Rangers still have many players who have either no playoff playoff experience or very little. There is going to be a learning curve as there was in the regular season where this team found its identity and learned to be competitive.

Rising to the level of playoff intensity

The playoffs are by nature more intense than the regular season. Every team wants to win the Stanley Cup, and no one is going to be easy to play against. In the second period against the Hurricanes on Tuesday night, the Rangers were outskated and outplayed. They weren’t entirely unable to match the Hurricanes’ intensity though. They outshot the Hurricanes 30-25 and hits were even at 19 each. While they had more shots on goal, Carolina did a better job of keeping the Rangers to the outside and taking away the middle, making it difficult to get quality shots. This is an example of something the Rangers will have to learn to deal with in order to have success in the playoffs.

As has been earlier in the season, the Rangers didn’t quite play a full 60 minutes against Carolina. They were strong in the first period, outshooting Carolina 14-8, putting on pressure, and just generally being the dominant team except in the last few minutes. But the Hurricanes came back and were ultimately able to win 4-2. Their solid forechecking in the offensive and ability to keep the Rangers to the outside in the defensive zone helped them be difficult to play against.

What was really concerning was how easily they handled the Rangers #2 ranked power play killing all 4 chances against. This is something the Rangers must fix when playing an aggressive PK unit. 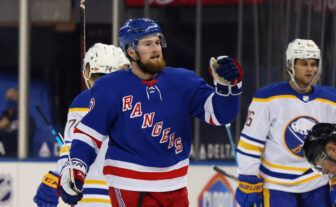 While the Rangers may have played a depleted team in the Flyers on Wednesday night, they played smarter hockey than they did the previous night. Ryan Strome took a hooking penalty in the third period against Carolina while the Rangers were on the power play. Strome is a valuable player for the Rangers playing between Artemi Panarin and Andrew Copp, but this just isn’t a smart penalty to take.

Against the Flyers, the Rangers didn’t apply much pressure once they were up 3-0. The Flyers were missing six key players, so there was no reason to play at 100% intensity with a three-goal lead. This is especially true since they played an exhausting game against Carolina the night before. Once the playoffs begin, smart situational hockey in general is going to be an important factor.

“Tonight we traded chances a little too much,” Gallant said after the game. “But overall we’re getting ready for it (playoffs) and hopefully we keep playing well down the stretch.”

The Rangers are an interesting team because they’ve been surprising this season. They could be surprising again in the playoffs. Overall, they can likely be competitive but must improvement in some areas in order to be a real cup contender. An intense game against Carolina made that clear and will hopefully serve as a catalyst for that improvement.