NHL: Jack Eichel’s arguments against the Sabres gets boost from Robin Lehner

One of the biggest points of contention in the Jack Eichel saga has been how the Sabres have dealt with his neck injury. Things came to a head when his agents Peter Fish and Peter Donatelli called out Sabres management and medical staff almost two weeks ago.

“The recommendation by Jack’s independent neurosurgeon, other spine specialists consulted, and the surgery Jack feels most comfortable having in order to correct a herniated disc in his neck is to proceed with Artificial Disc Replacement surgery,” Eichel’s agents wrote. “A further point of concern is that our camp was initially under the impression that the Sabres specialist was in agreement with the Artificial Disc Replacement surgery until it was no longer the case.”

This argument just got an expert witness to testify, and it certainly doesn’t help Buffalo’s case.

Robin Lehner on Sabres medical staff and playing in Buffalo

Golden Knights goaltender, Robin Lehner was on the Cam and Strick Podcast and gave one of the most candid interviews heard in years.

One of the biggest insights gleaned from his appearance was his need to get out of Buffalo. He also details how he feels the Sabres mishandled his injury which makes him sympathize with Jack Eichel.

“Listen man, here’s the thing you need to understand, Buffalo people are great,” Lehner started to explain about his time there. “I go to Buffalo, I wasn’t ready dealing with my concussion from Ottawa. First game of the season and I tear everything – high ankle sprain and I tear everything in my foot. [The Sabres] hired like 12, 13 new people that year that never been around hockey – the medical guys and physios and all that stuff…and I ended up getting a lot worse and ended up getting surgery at the end of that season because they just kept screwing it up.”

Lehner started also detailed how mentally playing in Buffalo was taxing. He credited the fans for being passionate but because the franchise has been so unsuccessful it was difficult to deal with negativity.

“It hits you in the face, it sucks,” he explained. “You try to play the game you love…you go out in warmups and it’s just you know – because they’ve lost for so many years – it was like they hate you, it wasn’t fun. They call out the names and they cheer for Jack Eichel and boo the rest.”

Host Andy Strickland joked after Lehner’s comments about cheering Eichel that he wants out too. That’s when Lehner backed the 24 year-old center’s issues with the team over the handling of his neck injury.

“It’s another medical problem there, too,” Lehner began. “I mean the [expletive] they did to some of the players when I was there and especially to me regarding my ankle. I mean it was crazy, man. I had a high ankle sprain – they had me on the bike one week after. One week after I had fully torn everything, worst grade ankle sprain, one week after they put me on the bike in a special boot. I should’ve been walking on it maybe six to eight weeks after I got it (surgery). They had me doing leg presses with like 300 pounds three weeks into it and I re-sprained everything and I had to have surgery.”

Lehner then sympathized with Eichel’s situation and admitted any player at a young age, what control do they have?

“Eichel said it himself, he doesn’t make his decisions about his body – it’s not him,” Lehner related. Strickland reiterated the importance of being able to trust the medical people around you, but Lehner wasn’t having it. “[Eichel] wanted to have another surgery, he thought he was allowed to do what he wants with his body.”

The full episode can be heard here.

After this interview, Eichel and his camp now have even more weight to their claims. The court of public opinion is heavily in their favor.

When you combine this interview with Eichel’s surgeon Dr. Chad Prusmack appearance on the 31 Thoughts Podcast, Buffalo doesn’t look good.

Dr. Prusmack explained that an artificial disc replacement is not only better for Eichel’s long-term health, the recovery time is about 8 weeks. He also noted that the traditional treatment of a fusion for a herniated disc limits movement and has a longer recovery of about 12 weeks. Furthermore, he said that after Eichel’s career, he could require several more fusions to correct his issues.

After hearing that, one can easily see why Eichel wants the disc replacement procedure over a fusion. To be fair to the Sabres, we need to remember that this is Eichel’s doctor talking here.

“What is being left out of the discussion is that Jack would be able to play in the NHL for the start of the season pending medical clearance if he were allowed to have the surgery he desires,” Eichel agents said two weeks ago. “Repeated requests have been made to the Sabres since early June to no avail. This process is stopping Jack from playing in the NHL and it is not working.”

According to the Buffalo News, the Sabres have not commented on Robin Lehner’s remarks. 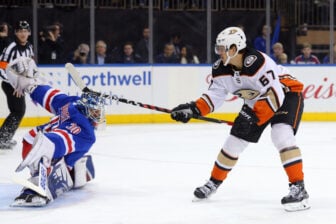 Also Read:
Can the Rangers sign Henrik Lundqvist if he’s cleared to come back after buying him out?

-This article was first published at The Daily Goal Horn

Kirill Kaprizov has an offer from the KHL, but some say it’s a bad bluff. Read More.