John Tortorella wanted out of Columbus a year ago? According to Aaron Portzline that was exactly the case and could partially explain this very difficult season.

John Tortorella wanted out a year ago

Aaron Portzline of The Athletic is reporting that John Tortorella wanted out a year ago. It appears Torts could see the writing on the wall and that the Blue Jackets new direction wasn’t lining up with his own philosophy.

The Athletic confirmed this week, however, that Tortorella tried to step down last offseason after the Blue Jackets were bounced from the bubble in Toronto following a qualifying-round win over Toronto and a first-round playoff loss to Tampa Bay. The veteran coach was reading the room and reading the tea leaves, realizing the direction of the club was heading was nothing close to what he thought they were building just two years earlier.

So what brought Torts back this season? Portzline writes that it was Nick Foligno who met with the coach to come back and finish what they started. It obviously did not work out and Foligno is currently playing with the Maple Leafs in Toronto. The question for me is, will Foligno go where Torts lands this offseason? Free agency opens on July 28 so stay tuned.

The Rangers have already spoken with one high profile candidate in Gerard Gallant. Word is that the meeting between he and Chris Drury went well. However, the new President and GM will be speaking with at least 4-5 more candidates and John Tortorella is expected to be one of them.

Other names likely to meet with Drury are Bob Hartley, Bruce Boudreau, Claude Julien, and Mike Babcock. No word has surfaced on if any more interviews have taken place or are scheduled.

You wonder if Torts would have been available this season, would John Davidson and Jeff Gorton have brought him in? A fun game of what ifs, but the real question will be for Drury to find the right coaching fit going forward. 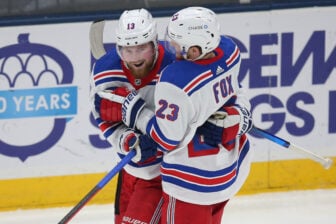 Also Read:
How much have the New York Rangers plans changed with Chris Drury in charge

The NHL has suspended Panthers center Sam Bennett for game two of the playoffs with the Lightning. For more read here.