Lightning advance to round 2! Andrei Vasilevskiy made 29 saves and the Tampa Bay Lightning eliminated the visiting Florida Panthers with a 4-0 win in Game 6 of their Stanley Cup first-round playoff series on Wednesday night.

It was the second shutout in 59 postseason starts for Vasilevskiy. The other came on Sept. 28 in the clinching 2-0 victory against the Dallas Stars in Game 6 of the Stanley Cup Final.

Steven Stamkos had a goal and an assist, and Pat Maroon, Brayden Point and Alex Killorn also scored for the Lightning, who are trying to become the first team to win consecutive Stanley Cup titles since the Pittsburgh Penguins in 2016 and 2017.

“It was our best effort by far in the playoffs in the biggest game that we’ve played so far,” Stamkos said. “That’s what experienced teams do in those situations. They step up when it’s time to step up. We didn’t like our game last time (a 4-1 loss in Game 5) and we talked about it. We have the best goalie in the world, and he shut the door.”

Next, the Lightning will face the winner of the first-round series between the Carolina Hurricanes and Nashville Predators.

Brock Nelson and Ryan Pulock scored the tying and go-ahead goals 13 seconds apart in the second period as New York eliminated top-seeded Pittsburgh with a win in Game 6 of an Eastern Conference quarterfinals series in Uniondale, N.Y.

“This group always sticks with it,” Nelson said. “The fans gave us a boost, they were fired up today. They were rowdy, they were loud. … Once we got the lead, they were loud through the end. It’s awesome having them back. We just wanted to get that one in front of them.”

The Islanders, seeded fourth in the East Division, advance to face the third-seeded Boston Bruins in the semifinals.

Nelson scored twice with an assist and Anthony Beauvillier and Kyle Palmieri also scored as the Islanders closed out a series on home ice for the first time since beating the Washington Capitals in Game 6 of the Patrick Division semifinals on April 28, 1993.

Kevin Fiala had a goal and an assist and Cam Talbot made 23 saves for his sixth career playoff shutout as Minnesota forced Game 7 in its West Division first-round playoff series with a victory over Vegas in St. Paul, Minn.

“I’m just one piece here, and tonight there is 20 pieces out there that did their job, and it was just unbelievable to see and fun to play behind,” Talbot said.

Ryan Hartman and Nick Bjugstad also scored goals and Jared Spurgeon added two assists for Minnesota, which has rallied from a 3-1 deficit in the best-of-seven series with its second straight victory. Game 7 is Friday night in Las Vegas with the winner facing No. 1 seed Colorado in the second round.

Marc-Andre Fleury finished with 21 saves for the Golden Knights.

Stephen A. Smith roasts the Oilers

Check out this hysterical rant by ESPN’s Stephen A. Smith here. 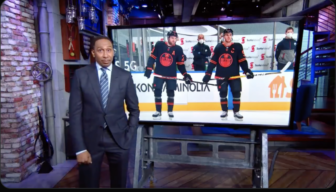