The NHL has already handed out some suspensions for two incidents involving hits to the head.

First, they suspended the Ottawa Senators Ridly Greig for one preseason game and one regular season game after he cross checked Pierre-Luc Dubois in the face. The Jets forward required 15 stitches afterwards.

Then they suspended Capitals defenseman Dylan McIlrath for a head shot. He received a total of 4 games (2 preseason / 2 regular season) for his shoulder to the head of Bruins forward Steven Fogarty.

The league is looking to come down harder on infractions this season, especially cross checking.

NHL to crack down on cross checking

The NHL is going to come down hard on cross-checking this season.

According to the league, there is no change to Rule 59 about cross-checking. It will just be a stricter interpretation and enforcement of the rule.

“Beginning in the 2021-22 season, there will be a stricter enforcement of rule 59; cross-checking,” the league video explains. “Cross-checking, like many penalties is a judgment made by an official, and is not black and white. No two plays are exactly the same.”

The NHL lists potential factors involved in a cross-checking penalty:

So why is the league doing this? To promote offense and reduce injury. Although one NHL Player Agent thinks this will be like similar applications to existing rules in the past.

The NHL announced updates to key dates on the calendar. All are listed below for your convenience.

* Also on July 12, RFAs may speak with clubs regarding potential interest. Club’s ability to offer 8 year contracts to their own free agents expire at 11:59 PM ET.

** 48 hours after last salary arbitration award is the deadline to exercise walkaway right. 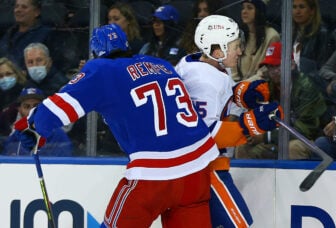 The New York Rangers will raise former goaltender Henrik Lundqvist’s No. 30 to the rafters at Madison Square Garden on Jan. 28.

The team announced Monday that his jersey number will be retired ahead of the Rangers’ game against the Minnesota Wild.

“Can’t tell you enough how much I look forward to be back in the place that has meant so much to me in my life,” Lundqvist posted on Twitter.

Since the announcement, ticket prices for that game have jumped up exponentially. According to TickPick, prices have increased by 219%. They continue to climb.

This will undoubtedly be the hottest sports ticket in town, and seats are still available. There have been some reports that tickets are now going in the thousands.